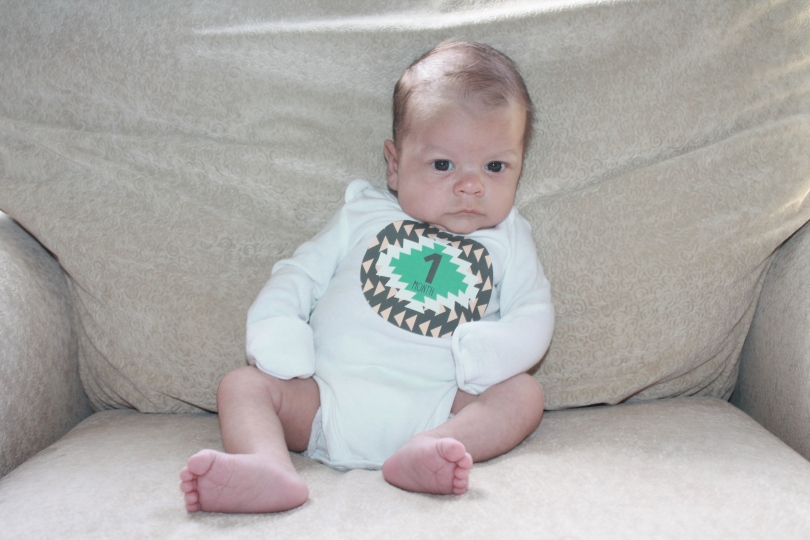 Adding a fourth little one to our family has really limited my time for blogging, but I really wanted to do blog posts about Nathan as he grows, like I did with the twins. It’s hard to believe that this precious boy has already been in our lives for almost ten weeks. Adjusting to life with four children has not been easy, but it has also been wonderful in many ways. Seeing how Noah, Eli and Emry Jane love and care for Nathan has made these exhausting days much sweeter.

Here’s a little recap of Months One and Two…

While in FL, Nathan met with a pediatrician there at 5 days old. He weighed 6 pounds 8 ounces and was 19.5″ long. He had already surpassed his birth weight by 8 whole ounces. He was quite the eater in those first several days, taking well more than the recommended amount, already eating 2.5 to 3 ounces per feeding. Once we came back home to NC, he had his first visit with our pediatrician, Dr. Pickens at 16 days old. At that appointment, Nathan weighed 7 pounds 1 ounce and was 19.5′ long.

At 2 weeks old, Nathan got to celebrate his first holiday with family: Halloween! He was Rocky from Paw Patrol. He slept through all the trick-or-treating attached to me in the k’tan. 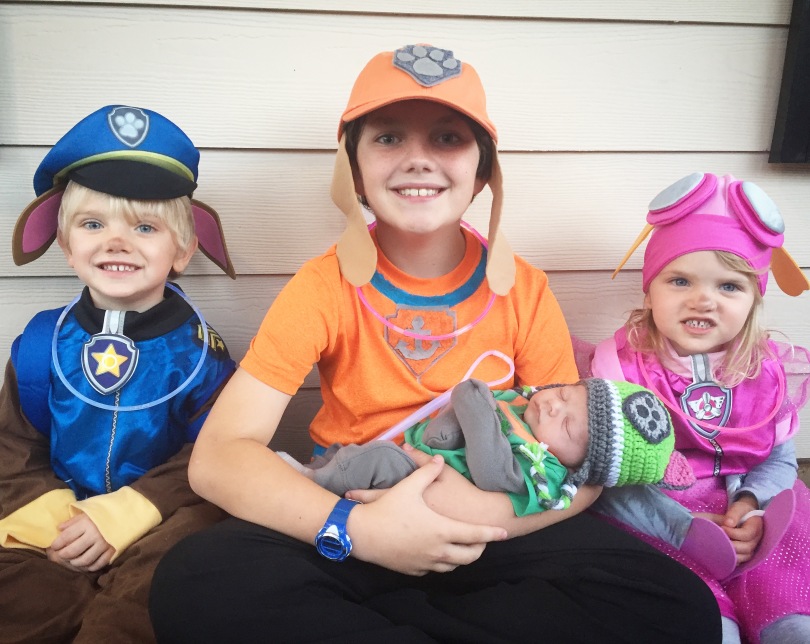 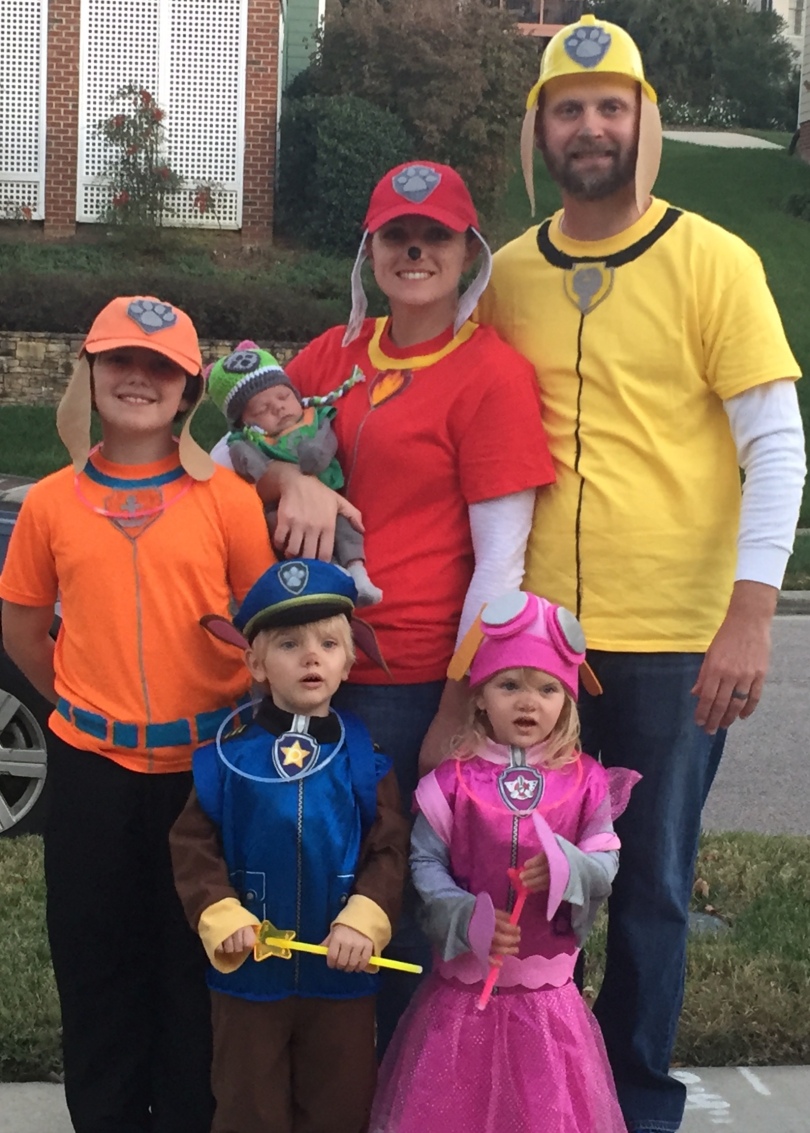 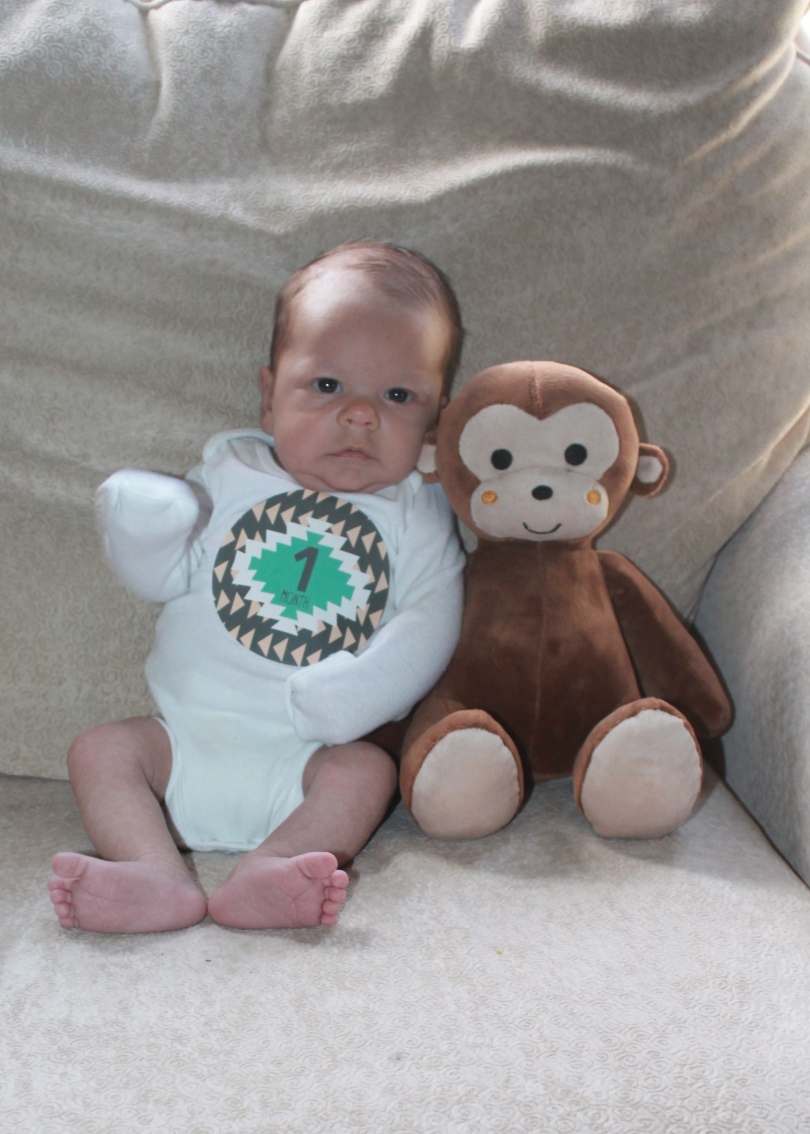 At one month, Nathan weighed 8 pounds 3 ounces and was 20.5″ long. Not quite Noah’s birth weight yet, but still growing over two pounds in his first month. Everything looked great during that appointment. Dr. Pickens suggested that we start 1/2 a mL of vitamin D supplements in his bottles per day. We also discussed a potential blocked tear duct in his left eye (that has already fixed itself!)

Two weeks after his one month appointment, Nathan earned himself another trip to see Dr. Pickens with his very first fever. Thankfully, the highest his fever got was 100.4, but because he was only 5.5 weeks old, they decided to do a blood draw and blood culture to rule out anything beyond a viral infection. All blood counts and cultures came back normal and he was feeling much better the next day. Emry Jane also spiked a fever (of 101.6) the same day, so we think they had the same bug. Two days later, we rang in Nathan’s first Thanksgiving with lots of family! There were 24 of us crowded around Nana’s table! 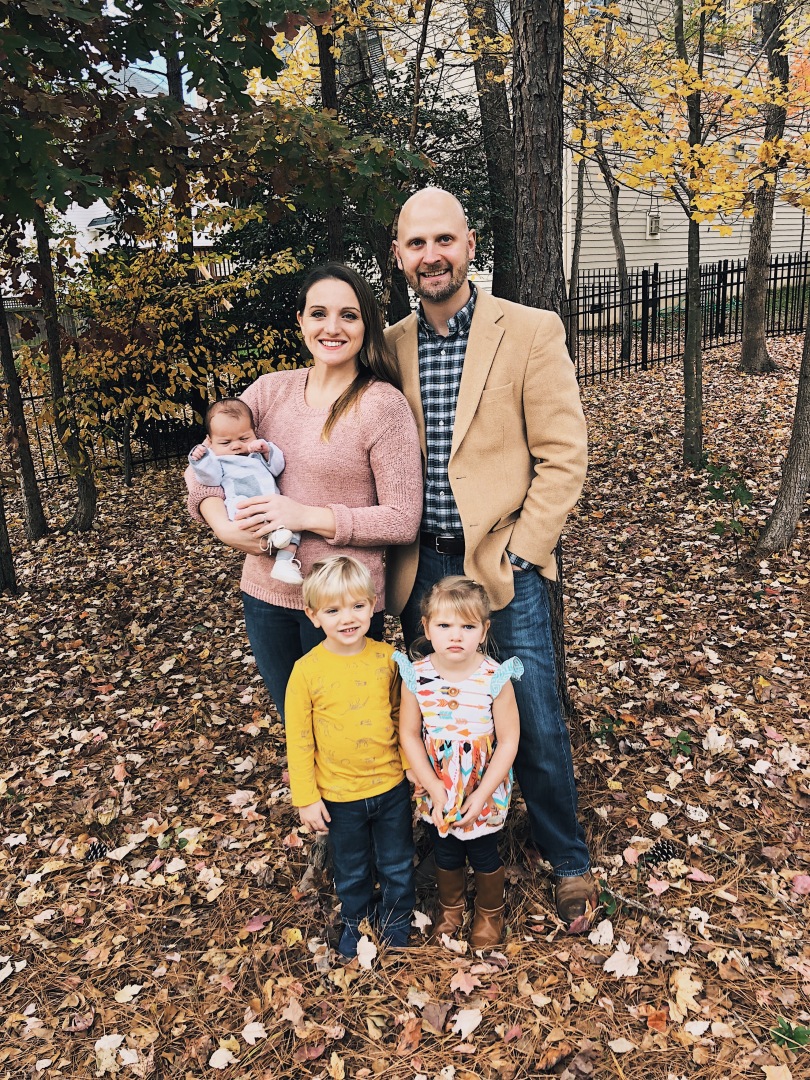 Nathan did a great job meeting lots of new family members over Thanksgiving. He was willing to be held by various aunts and grandparents. The following week, Nathan had his first babysitter(s) while T and I went to his work Christmas party. He did great and spent almost the entire time sleeping on Papa.

At 6 weeks, Nathan started smiling. He has the best, sweetest little grins ever and most often he smiles in reaction to being talked too. His very first smile was actually while I was giving him a bath (Nana was there to prove it!) at 5 weeks, but by the 6th and 7th weeks he really had the smiling down. 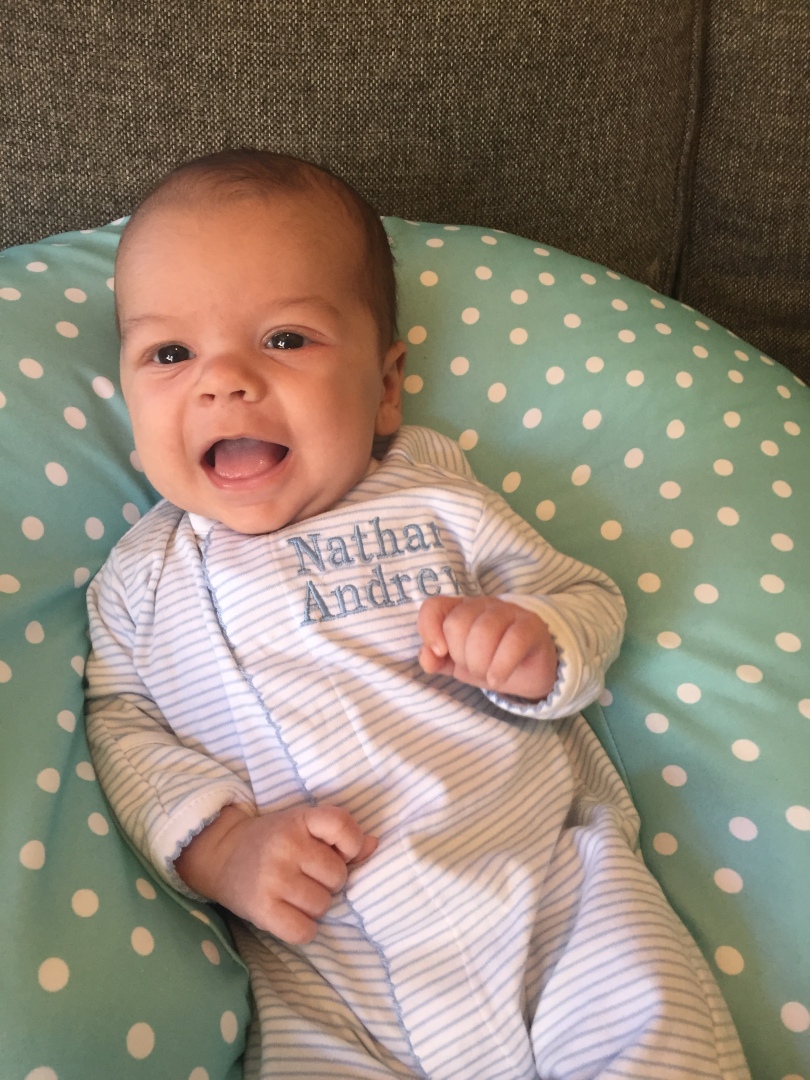 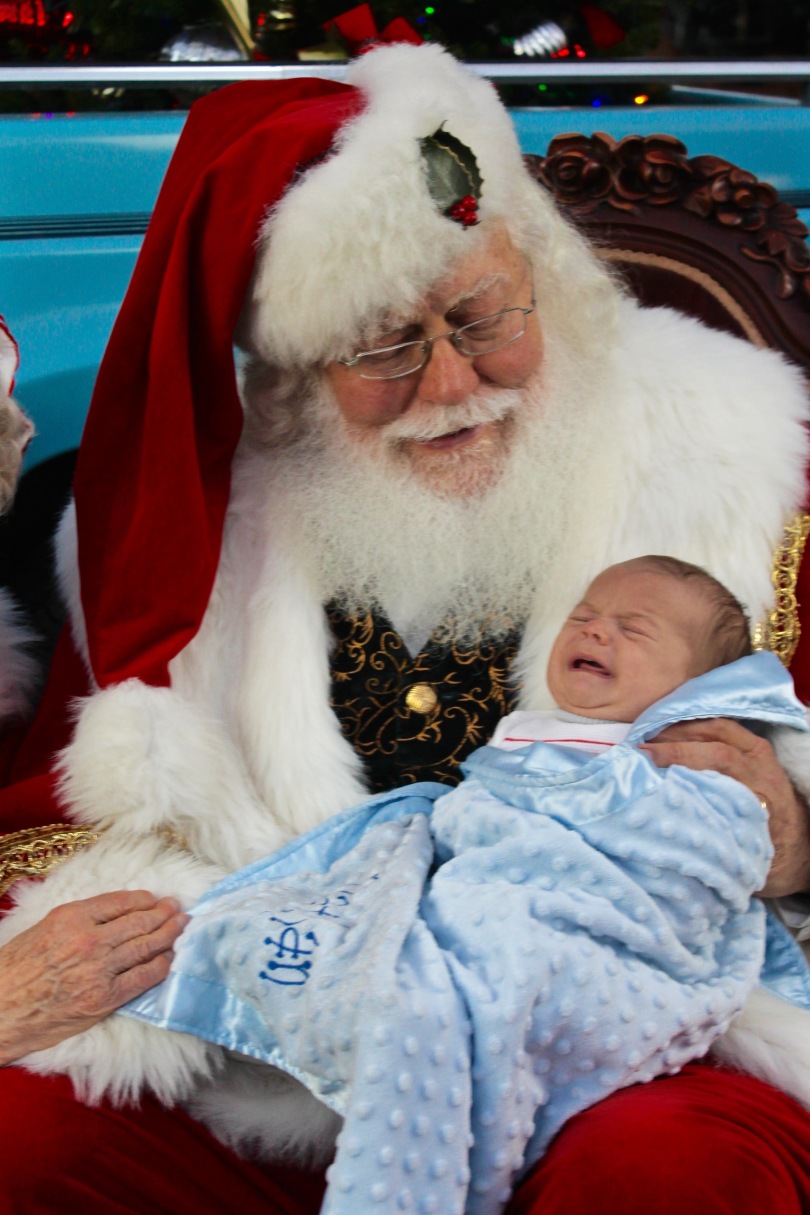 On December 11th, his two-month birthday, Nathan weighs 10 pounds 6 ounces and is 22.2″ long. I am pretty sure that he gained most of his weight in those precious chubby cheeks! He is just starting to kick his feet and coo after he smiles. He currently enjoys 2 oz or so every 2-2.5 hours during the day and has one 5-hour sleep stretch at night, followed by 2-3 hour stretches. For the first 7 weeks, he would eat 3 ounces every 3 hours like clockwork, but he’s trying to shake it up now. He really enjoys nursing, but does not mind taking a bottle when he needs to. So far, he does well with Similac Pro-Advance formula mixed with breastmilk (1:2 ratio) for bottles. He is not sold on baths, especially the part where he gets stripped down before or lifted out of the warm water after. We are working on that. 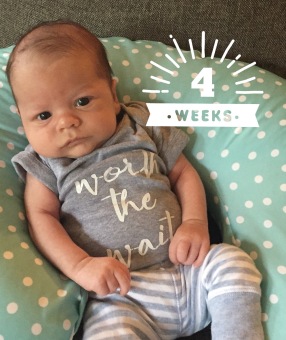 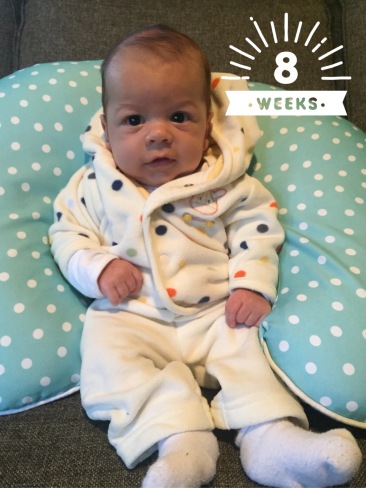 Check out this growing boy and his facial expressions. I really enjoy taking these photos each week because he always gives me the best raised eyebrows and smiles. 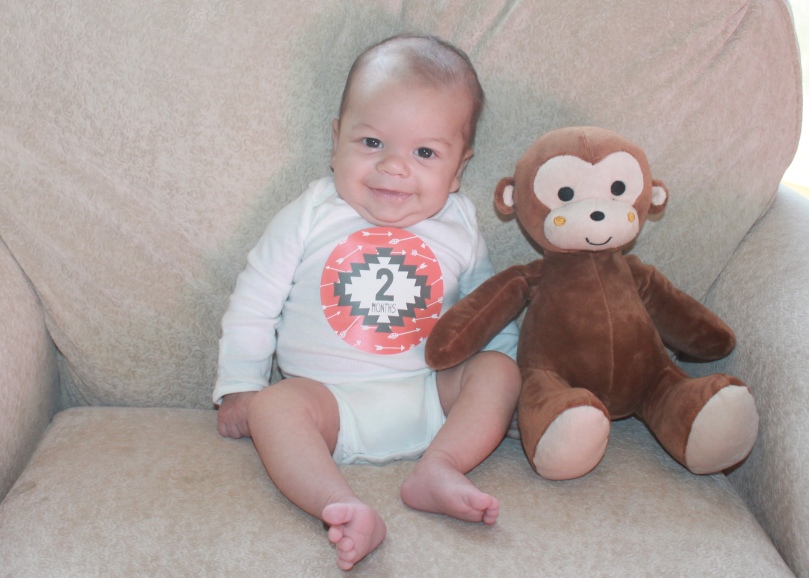 When he first came home, he would not sleep anywhere but on my chest. I think that with all these other loud little people in our home that he needed that time where it was just us. Now, he’s transitioned to sleeping in his belly in his bassinet by our bed or beside me (after we fall asleep when he nurses.) I think induced lactation has really helped with our bonding. He definitely knows who Mommy is. If he’s with Daddy, he will lean/move his whole body towards me in an effort to get to me 🙂 He is not a consistent napper yet, but we will work on that once he gets a little older. For two months, this baby boy has brightened our lives. We are so grateful to God and to Mama J for entrusting us with our precious Nathan Andrew. I cannot wait to see all the great things God has in store for our boy!