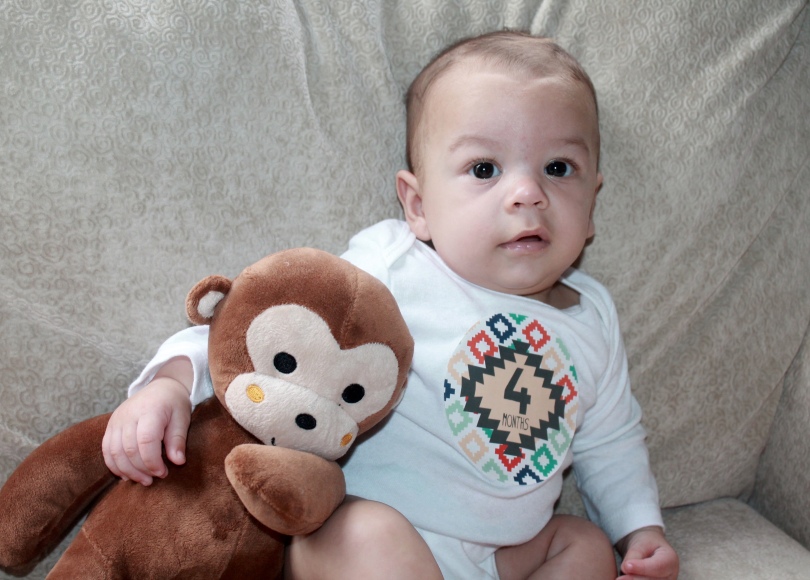 Time flies when you are having fun… or when you are busy chasing four kids around. There are multiple times a week when I think about blogging and several posts I want to do to “catch up,” but the time just keeps escaping me. Nathan is less than a week shy of 6 months and I haven’t put pen to paper (or is it type to blog?) much in the past 3 months. Here’s a quick wrap-up of months three though five:

A few days before turning three months old, Nathan got to experience his first snow. He was not a big fan. Then two weeks later, it snowed over 11 inches. He tolerated it a little better for a few pictures, but our Florida baby is not interested in playing outside when it is cold. 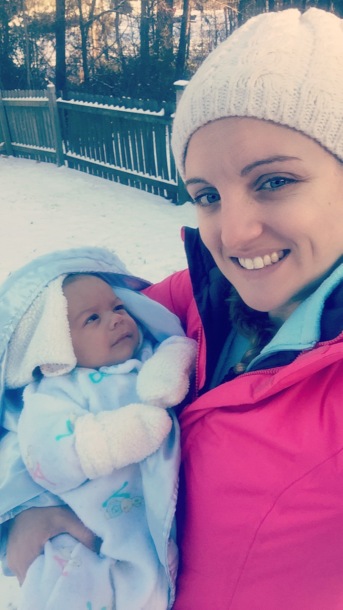 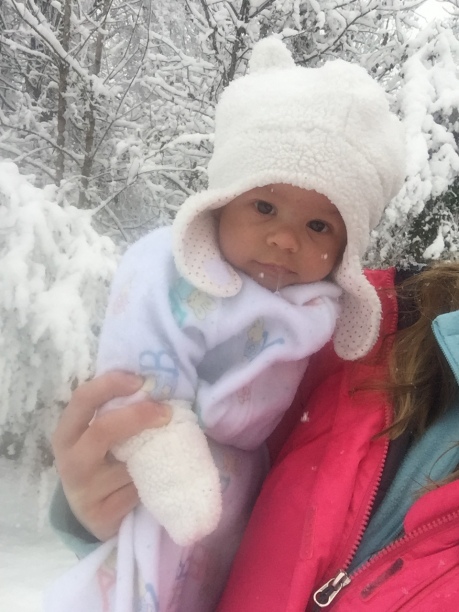 During Month 3, Nathan started drooling more and gets to wear bandana bibs from Copper Pearl whenever he’s not in a sleeper. They are absorbent and super cute! He chews on his hands all the time. We can see the little tooth buds under the gums, but no teeth yet! 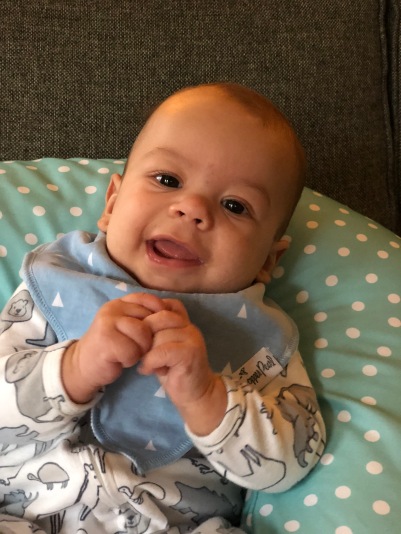 At his four month appointment, we learned that Nathan is continuing to rock his own growth curve at about 8th percentile. The doctor was very encouraging about continuing breastfeeding through induced lactation and feeding him the combination of formula and donor breastmilk. At three and four months, he was taking between 2-3 oz per bottle feeding and nursing in between. His during-the-night feedings are just nursing. It has helped us both get more sleep; however, Nathan wakes up between 2-4 times per night to nurse.

Nathan started rolling at 4 months. He rolled from front to back for the first time at 4 months (18 weeks old) and then from back to front at 5.5 months old. He rarely rolls continuously from front to back to front, but he has a few times. He is a belly sleeper and has also started rolling onto his back when he wakes up from his naps. Nathan did not like woombies (a type of swaddled that the twins loved) but the Zipppadeezip has worked so well for him. We call it his starfish. We love it because it keeps his hands warm during the night and he can wear it in the carseat on cold mornings or when we are traveling during his nap time.

Another fun highlight– Nathan got his first pair of shoes at 4 months.

At five months, Nathan is almost 14.5 pounds. He has moved up to taking 4 ounces per bottle feeding. We are no longer using donor breastmilk. We depleted our donor milk supply over Spring Break. Nathan has had formula-only bottles since April 1st and has done fantastic with them. He will not drink his milk cold. We introduced a couple of foods this month, after he showed a lot of interest when we were eating.

He did well with sweet potatoes his first time, but did not like them on the second and third attempts. We have also tried pears, which he hated, and butternut squash, which he seems to like the best so far. He pushes all food out of his mouth and tries to grab/hold the spoon during feedings. It’s a work in progress. 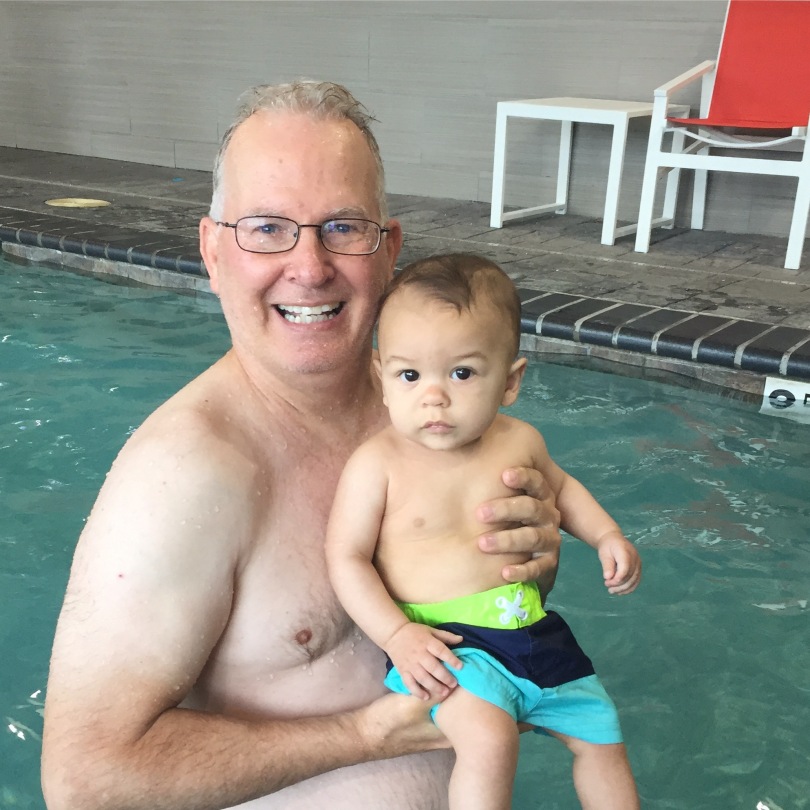 Over Spring Break, Nathan “swam” for the first time. MaMarsh, Granddaddy Jer, Auntie Mamey and cousin Tenley came to Knoxville to visit us while we were there house-hunting. They stayed at a hotel with a pool so that the kids could swim. Nathan really liked swimming, though it’s hard to tell from his facial expression above. He did a lot of splashing with his hands and feet. 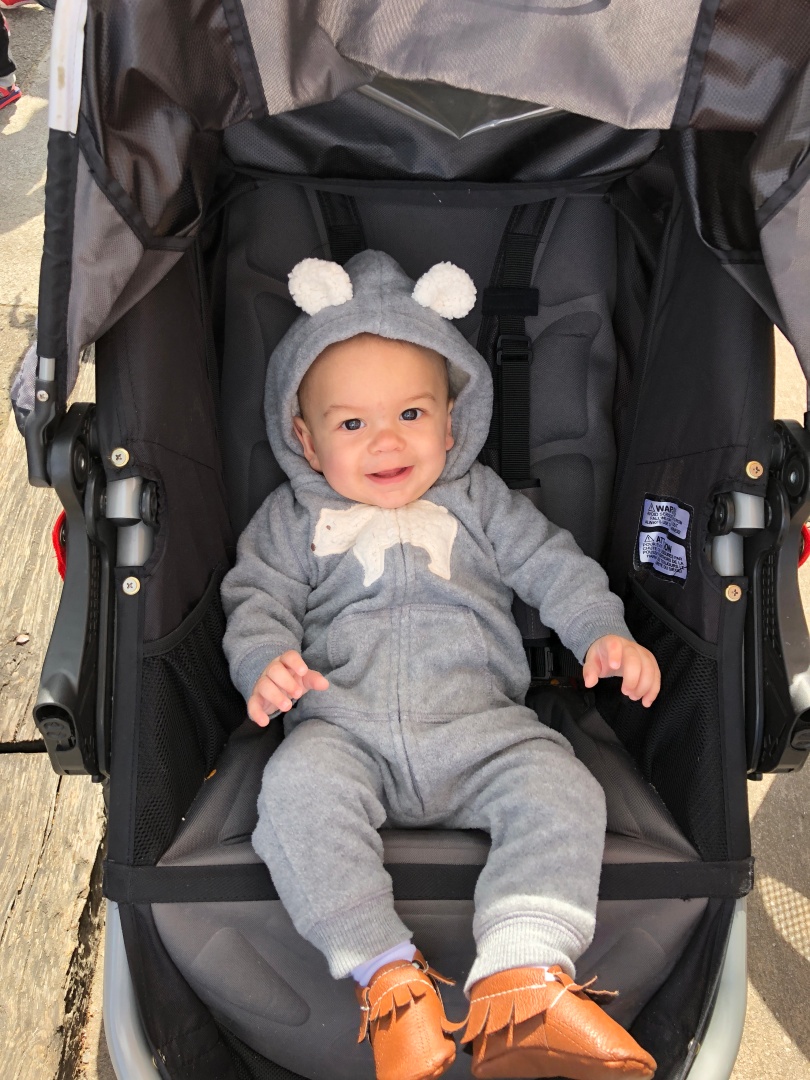 Another fun highlight at 5 months– Nathan’s first time at the zoo and first time in a stroller. The stroller ride only lasted 5 minutes before Nathan started crying. He definitely prefers the Ergo 360 where he can snuggle against Mama! The twins wanted to ride in the stroller anyway, so it worked out well.

Nathan is such a happy boy! He gives us so many smiles, but does not laugh very often. He will laugh when tickled; however, tickling makes him mad after a few seconds. He laughs most often when playing peekaboo. He loves his siblings. He gets very excited when Daddy comes home from work, but Mama is still his favorite. He is such a blessing to our family.