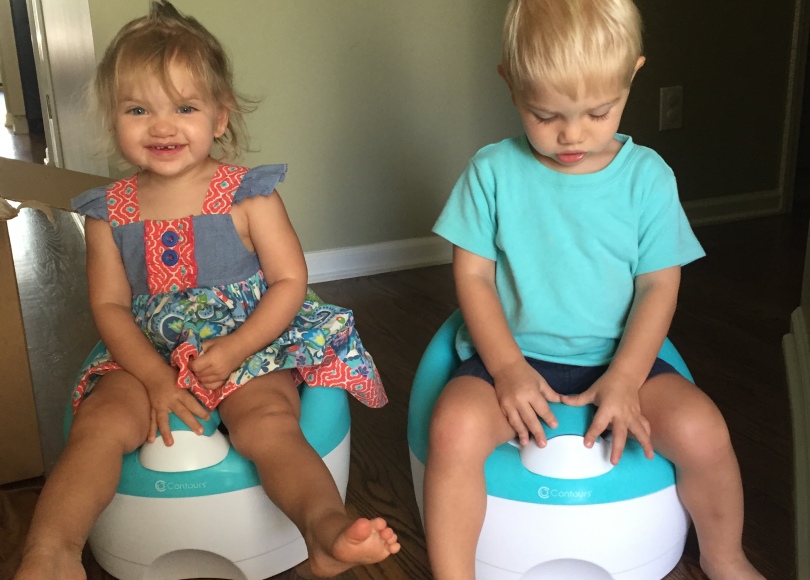 Two is a big year for a kid. They are a full-blown toddler and, usually, there are lots of transitions at two. Transitioning to a toddler bed, transitioning away from the pacifier, transitioning to the potty instead of diapers… And for our kids, add to that a new room, in a new house, in a new town and Dad has a new job. That’s a WHOLE LOTTA of transitions in 6 months. TIMES TWO KIDS (plus big brother, Noah, but he gets a separate post.) Phew, it makes me want to go grab more coffee because Mama is tired! Age two for Eli and Emry Jane has come with lots of changes, but also lots of fun. They have progressed a lot in just 6 months. They have opinions on almost everything and they verbalize these opinions to get their way. Or they use tantrums. Or biting — which is nearly the same thing as verbalizing their opinions. *insert eye roll.

Like I mentioned in the last post, I THINK about blogging a lot. Little or funny things happen and I think oh, I want to type this into the blog so that I will remember it, but I seldom sit down and type. One because Tommy takes our home laptop to work with him for his research project. Two because there is very little time for me to actually sit down these days. Busy, busy, busy. Just the other day, a friend of mine, who has boy/girl twins that are 6 months old, texted me about sleep training. I sent her this long text answer about how we did it and then I went back and read our blog about how we sleep-trained our twins. The answers were similar, but there were also details that I had completely forgotten about, like the fact that I slept in their room for a few months on a twin pullout bed because it was easier than going up and down the stairs 100 times a night to comfort them. Sleep deprivation is a tricky thing. I then sent her the blog post so that she could read how sleep training my twins really went down. That is why I spend nap times here and there typing this stuff– I like going back and re-reading and pumping my fists in the air because LOOK AT ALL WE HAVE SURVIVED. Twin mama (and daddy!) life is tough, but twin mama life is also wonderful. 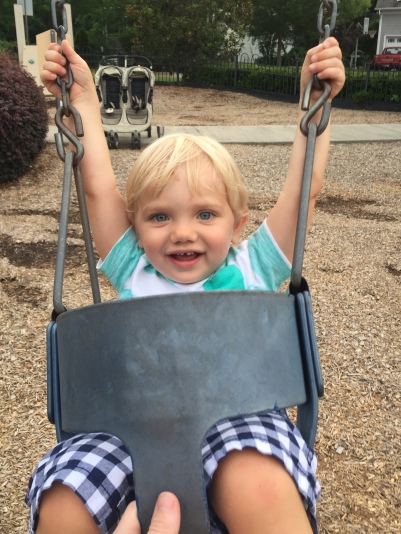 Back to those transitions, Eli and Emry Jane were not easy to transition to their toddler bed. Read about that adventure here. They did eventually learn to stay in their beds and nap time got easier. Around that time, we went to their first pediatric dentist appointment and she said “nix the pacifiers. They are keeping their teeth from moving down properly,” so in October (at 28 months old,)  we nixed the pacifiers. It was about 3 weeks of pure hell. It was back to sleep deprivation all over again with SO MANY trips into their room each night to comfort them. They would cry the most heartbreaking cries and say “Mama fix it. Daddy fix it.” And then, Emry Jane started cutting her two year molars and she was sooo grouchy– do you know what helps with pain when cutting molars?! Sucking on a pacifier. *insert banging head on table. We toughed it out though, without Mary and Montavius. (For those of you that do not know, those are the names of our twins’ lamb pacifiers. Emry Jane’s was named Mary and Eli’s was named Montavius. You’ll have to ask my husband why he decided to name the pacifier Montavius– that was NOT my doing. Mary and Monty now live in the twins’ memory boxes in their closet.) About halfway through November, 5 months after moving to NC, we conquered the toddler beds AND nixed the pacifiers and Eli and Emry Jane finally started napping normally and going to bed sans-pacifer without major meltdowns. Praise the Lord. Unfortunately, this has now made car travel harder because they will not sleep in the car without their pacifiers. They slept for ONE hour of a 13 hour car ride to FL and we travelled through nap time and well into the night (arriving after 1 am,) so there’s that.

The next of the big transitions that we needed to tackle was POTTY-TRAINING. In early August, I bought the twins two potty seats off Amazon. We talked it up and offered M&Ms as a reward for going, but there was very little interest from Eli or Emry Jane. EJ did go a few times in the beginning but then she refused to even sit on the potty. She would scream and push herself up to keep from sitting on it. Eli went once entirely by accident and then nothing for the next several times. He was pitiful because he would sit there and squeeze and scrunch up his sweet little face and say, “Help me, Mommy.” We have yet to figure out how to get him to relax and release the pee, even if he’s been dry all night and we know that his bladder has to be full. We decided not to push it too hard because we were going to be traveling quite a bit in the fall/winter and would try to focus on it more after we returned from our Christmas traveling. The idea of stopping every 15 minutes on a road trip so that one of the twins can potty gives me major anxiety. I am not in a hurry to get to that point.

Two weeks ago today, on December 7th, we had our Wednesday playgroup over at our house to play. One of our 3 year old friends went upstairs with her mom and someone mentioned they went to potty. Emry Jane turned to me and said “me go potty,” so I took her upstairs to sit on the potty AND SHE WENT. From that point on, we had a completely-interested-in-potty-training daughter that now goes to the potty 8 or so times a day for M&Ms. She wants to be about 90% independent in going potty too, so we have switched her to pull ups so that she can pull them up and down herself. She also dumps the contents of her potty into the toilet and flushes it. I’m just in charge of cleaning the potty and handing her the container of M&Ms, so that she can pick her own piece of candy. “Me do it myself,” she says. When I bought training underwear for our twins for Christmas, I did not expect that Emry Jane would actually be ready to wear them by then, especially with her hatred of potty-training before! She keeps her pull-up dry all day, unless she needs to go #2. She’s a bit traumatized by poop (I blame a couple of bath tub incidents) so she will not poop on the potty yet. We’ll work on that part. She is also mostly dry during naps and overnight too, though we still use a regular diaper at night just in case. She has not really motivated her brother to try the potty. He will sit on his potty once every couple of days, with no results. Eli is almost always nearby after Emry Jane goes potty, in case she’s friendly enough to give him an M&M too. We did try to refuse him an M&M since he is not actually going potty. It lasted a few days. His crying was so pitiful that, for now, he gets rewarded if he sits and “tries” …and when EJ is sweet enough to give him an M&M when she goes.  Like all of our toddler transitions, we will figure it out eventually. He won’t be wearing diapers to Kindergarten.

Yes, there are times with twin mama life is hard. There are lots of tantrums and almost always when someone calls on the phone, one or both of my toddlers are screaming. We had a couple weeks where they were constantly biting each other (which hasn’t happened in the last week or so, thankfully!) They tend to run away in opposite directions, though Emry Jane is much better about listening and staying with me than Eli. BUT there are so many more times when they are so sweet and loving than when they are throwing tantrums or biting or running away.

In September, they started to play pretend together. They were playing house on the screened-in porch and pretending to sleep and take care of their babies (stuffed Mickey and Minnie) and then drove around in EJ’s cozy coupe together… and I thought my Mommy heart was going to explode from watching them play like that. In October, they started saying “I love you” to us and to Noah and to each other. The first time Emry Jane looked me in the eyes and said “I love you, Mommy,” I cried. In November, Emry Jane read (her version of) Go Away Big Green Monster to Eli in the kitchen floor. Thankfully, I caught it on video so that I can always remember her sweet little voice shouting, “and don’t come back! Until I say so.” 🙂 Eli and Emry Jane love being read to, especially Look and Find books just like their big brother Noah. This month, while playing in the bathtub, Emry Jane pretended to be Santa Claus and asked Eli what he wanted for Christmas. Eli said “A hockey stick” (which he’s asked for about 400 times thus far) and she said, “Here you go” and pretended to hand him a hockey stick. Their speech has improved tremendously over the past couple months. They are stringing together several word sentences, especially Emry Jane. Eli puts several words together too, but he is a little bit harder to understand. They hug and kiss each other, sometimes unprompted. Last night, Eli attempted to crawl into bed with Emry Jane, which he hasn’t done in almost two months. It is so clear that they love each other so much and I am so fortunate that God allows me to be their Mommy and watch their relationship grow every day. Parenting is so hard, and not just with twins!, but it is so worth it. I’m looking forward to the second half of age two with twins.