I stalled on family photos this year because we wanted Nathan in them. Of course, once we got home from FL, it became a mad dash to find a photographer to take the photos, a weekend that worked for everyone and coordinating outfits. I had a few ideas for things that I wanted Nathan to wear but they were all too big for him. I also wanted him to wear navy because that’s Mama J’s favorite color. I know that she will treasure these photos of him, just as much as we do. We coordinated everyone else around this little navy hand-me-down sleeper.

The next two photos almost did not happen because I almost forgot about the “hands” shot. This pose started in Noah’s newborn photos and we have a large, framed 16×20 black and white portrait of him in our hands. When the twins were born, we contacted a photographer that did not live in Knoxville (he traveled to us for their newborn session) specifically to replicate this photo of them resting individually in our hands. We have their 16×20 prints too, though to be honest, I haven’t even framed them yet! About an hour before the photographer was set to arrive on Saturday morning, I remembered the hands pose and immediately texted her to see if she was willing to take photos of Nathan in the same pose. She brought a black fleece blanket with her to our house that we draped over the foot of our bed to create this backdrop. Considering Nathan HATES being naked or cold, I think they turned out really great!

We chose the other shot (below) to frame because I wanted more of his sweet face in the shot, but I really like this one too because he’s staring so intently at me while holding on to his Daddy’s hand.

The twins look turns scowling/frowning/staring seriously at the camera so there are very few photos where they are both smiling. Noah did an outstanding job, both with holding Nathan and following the photographer’s directions.

See, Serious Eli. He did the majority of the straight faces.

This photo is one of my favorites because of our wedding photo in the background. It’s where we came waaaaay back in 2011 from vs. where we are now just six years later!

Most likely to be framed goes to this one, even with the twins’ half smiles. I just love the close-up of everyone’s faces. 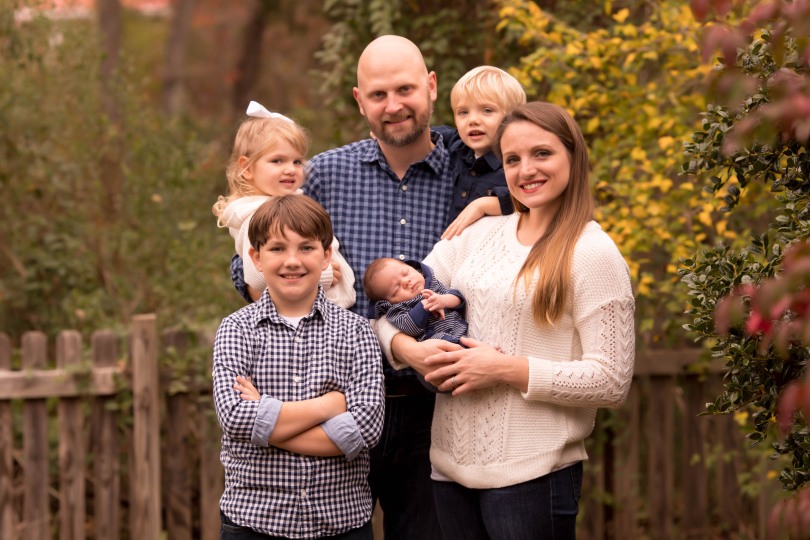 Thank God for this precious little boy and thank you to Morgan Henderson Photography for her patience and flexibility during our photo shoot!