As soon as we found out we were having twins, I knew I wanted a fun gender reveal. Gender reveals seem to be a new and trendy thing to do and I’ve read on the message boards that “nobody cares what you are having” but we had 30 LOUD, excited guests at our reveal so I beg to differ 🙂 T agreed to having the reveal on one condition– that we were also surprised and would find out at the same time as our family and closest friends. Boy, was that hard for me!

Our reveal was scheduled for Saturday, February 22nd at 2 (2/22 at 2– yes, that was intentional!) and our anatomy scan was the Tuesday before. We got to watch most of the scan but had to cover our eyes when the tech searched for gender parts. My OB also had a hard time not revealing to us– she quickly walked us through all the details of the anatomy scan (brains good, hearts good, stomach good…) and then kicked us out of her office before she spilled the beans! The secret was tucked into an envelope. I gave a friend the envelope and reveal boxes and she filled them with the balloons. She left the boxes sealed on the doorstep Saturday morning so she wouldn’t have to make eye contact with me! Those sealed boxes sat on our mantle for almost 4 hours before we could open them– talk about building the suspense!

Our guests started arriving at 2 and by 2:20 pm we had a packed house! We waited until about 2:45 pm to open the boxes to give everyone time to get some food and cast their gender votes. Noah was going to karate chop the boxes open if we waited another minute– he was so ready to see inside! Our teams gathered around the room and on the stairs for a quick group picture, then Tommy, Noah and I opened the boxes together. One box at a time.  We opened Baby A’s box first, then Baby B’s. Each opening was met with screaming and cheers from our crowd– It was truly an awesome way to find out the genders of our sweet babies!

Baby A (the baby on my left side) is a boy and Baby B (the baby on my right side) is a girl, which is actually what we thought they were. Baby A has always been so active during the ultrasounds that I thought “he’s energetic like his brother” and referred to it as “he” from about 12 weeks. Since T was convinced we were having one of each, I assumed B was a girl but my feelings weren’t as strong with her. At 15 weeks, their heart rates were 14 BPM different and that made me feel more confident that we were having one of each. We also watched our DVD of the full anatomy scan after the reveal to make sure the balloons and envelope were accurate 🙂

Below are some of the details of our gender reveal. I had a lot of fun planning and painting and crafting for the gender reveal. It helped keep me distracted during the week leading up to the reveal. Photo credit for many of the following pictures goes to Chelsea Magruder of Magruder Photo + Design. She photographed the event! My iPhone photos do not compare to her great pictures!

I painted the boxes in gray and white chevron to coordinate with our reveal invitations and overall theme of the party. Our invitations had boy and girl silhouettes and pink and blue ribbon with white polka dots, so I added those details to the boxes. I also added scripture to the outsides of the boxes.

“For this child I have prayed and the Lord has given me what I asked of Him” 1 Samuel 1:27

One of the best things about having twins is that I get to see them on ultrasound often (compared to only twice with our son) and we usually get a few pictures to keep from each one. I saw this idea on Pinterest and used our boy/girl silhouettes to coordinate. Again, at this point I had no idea that we were actually having a boy and girl! Photo Credit: Magruder Photo + Design

I wanted everyone to be able to participate in our reveal and to make it fun! I was worried that it would be awkward before and after the box opening if our guests didn’t have something to do! We decided to have everyone pick a team: Team Boys, Team Girls or Team Both. Our guests wrote their names on the scoreboard (see below) and wore the appropriate colored pin. I hand-painted the pins and hot glued the bows and footballs I found at Hobby Lobby. Tommy and I are big football fans so footballs with bows were perfect for us!

Once we knew we were having twins, Tommy just “knew” we were having one of each: a boy and a girl. Most of our family and friends agreed with T. Noah wanted two sisters because he wanted our family “to match”- 3 boys and 3 girls. He counts our dog, Manning. I did not necessarily want two boys but I was trying to prepare myself emotionally if it happened. I was so thankful to see those pink balloons! 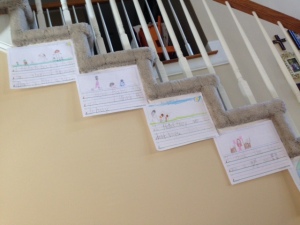 I teach Kindergarten and my students are VERY excited about the babies. The Wednesday before our reveal, I had them make their predictions of what they thought the babies would be. We used them as decorations for the party (and as something fun for our guests to read!) Surprisingly, 11 of my students thought we would have one of each! 5 chose girls and 4 chose boys.

I consider myself to be pretty crafty, but in no way could I have made these cookies! A parent from school made these for our reveal. They were adorable and tasted amazing. She used the leftover dough to make mini cookies (about quarter-sized) that looked like baby faces. These were a BIG hit at the party!

These are the quarter-sized baby face cookies that were made from the leftover cookie dough– how cute are they?

The decor for our gender reveal was mostly pink and blue. We had pink and blue lemonade, cups, plates, etc. I really love mason jars so we had to incorporate those into the food table. My friend Dani made the pink and blue dipped pretzels. The baby cookies were housed on the tall white stand. Photo Credit: Magruder Photo + Design