The last post was getting pretty long, apparently I have a lot to say about life thus far with twins, so I decided to make it into two posts. The other post also took me two days of pumping sessions to finish so I wanted to put it “out there” while it takes me another couple of days to finish the second half of the post 🙂 Part One of this post talked about how we have managed our schedule, or lack there of, and feeding of the twins. Part Two is about their sleeping habits and playing/activity.

When Eli and Emry Jane were in the hospital, they shared a bassinet. The nurses would take them to the nursery when I was sleeping, so I felt comfortable having them together. Once we got home, I was worried that they would suffocate each other in one bassinet so we separated them. For the first two and a half weeks, Eli refused to sleep in his bassinet. He would only sleep in his carseat, bundled up in a Woombie and his blanket tucked in tight at his waist. I think he missed the tightness of the womb. Around 3 weeks, he finally started sleeping in the bassinet at night IF he was dead asleep. In the past two months, Eli has only fallen asleep in his bassinet twice. He is NOT a self-soother by any means. He will take short naps in there during the day, once asleep, but he is up after 30-45 minutes once he realizes that he is not being held. Emry Jane will sleep anywhere. She has been great at sleeping in her bassinet. Often, she falls asleep in the swing while I am pumping and will stay asleep there until the next feeding. She sleeps well in the car, while Eli cries the WHOLE time. She sleeps a lot compared to Eli. He will take cat naps during the day (or sleep for a couple hours in your arms in the glider!) where Emry will sleep between 1.5-2 hours between most feedings, with the exception of the evening ones. Right now, the babies stay awake between the 5pm and 8pm feeding and are FUSSY. 6:30pm to 8pm seems to be their “witching hour” but we have had days where their witching hour was more like witching afternoons! 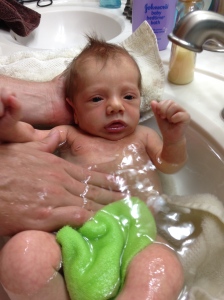 We are working on our bedtime routine, in hopes that the babies will sleep through the night (soon?!) Since we are still working on the schedule, the first month was hit or miss whether they would have a bath. I mean, they are not really dirty so why bathe them if they are going to scream about it?! They did not like baths at first, but now the bath seems to help them get ready for sleep. We started doing them nightly at 6 weeks. We bathe them in the sinks in our bathroom at the same time. When Tommy is on call, I bathe one after the other but the first baby gets really upset because they seem to have figured out that right after a bath is feeding time. They do not want to wait the five minutes it takes to bathe their sibling.

After their baths, I nurse the babies on our bed with just the lamp light on and minimal noise. We do not have a TV in our room, so it is usually pretty quiet in there. The babies like to nurse a long time during this feeding. Eli is totally a comfort nurser any way but he really likes to fall asleep nursing at night. We try not to let him fall asleep that way every night. I usually nurse them for about 30 minutes, then put Eli in his Woombie and then continue to nurse until they are done, about 15-30 minutes later. So far, even when we start at 8pm, we do not have both babies asleep until 10-11pm. It seems like one is ready for sleep right after nursing and the other still has 30 minutes to an hour of alert time left in them (or Emry Jane is really fussy and refuses to eat with her brother.) 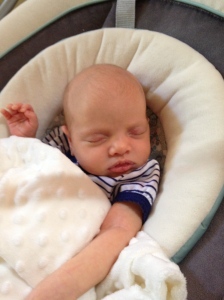 Their naps during the day are pretty inconsistent. Emry falls asleep while nursing a lot and can be moved to her bassinet for the rest of her nap. They fall asleep in their swings for at least one nap a day. They are not very fond of the bouncy seats yet. Emry will only sleep there if I move her there once she is asleep to finish nursing Eli. I am trying to give them more consistent naps but it has been very challenging with their erratic nursing schedule.

Eli and Emry Jane do not do much playing yet. They despise tummy time, especially on the activity mat. They tolerate short tummy times better if they are on the bed with one of us. They are not very fond of the bouncy seats. They swing just long enough for me to pump a few times a day and maybe during dinner. Basically, they are either being held or asleep, usually while being held! I use the Baby K’Tan often to wear a baby while I get things done. Sometimes I wear one baby in the K’tan so that I can hold both babies more easily. We also have two Ergos that we wear when we are out at places like the grocery store. The babies like to go outside on the front porch. They do not mind riding in the stroller to pick up Noah, as long as they have full bellies and I continue to move them while we wait for the bus! Our biggest milestone these first two months was smiling. They have had gassy or sleepy smiles since birth, but at six weeks they started smiling at people– mostly Tommy and me. Eli’s smiles are few and far between but Emry Jane is happy most of the time and seems to like showing off her gummy smile 🙂 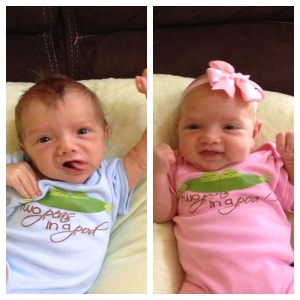 At two months, Eli weighs 8 pounds 6.5 ounces. He’s gained a little over 3 pounds since coming home from the hospital. He loves to be held, especially by Mommy. He likes warm baths. He dislikes car rides, loud noises, getting his hair washed and any time he is not being held. Ha! He does well when eating from a bottle and is still a slow nurser, even with the nipple shield. He has a sensitive stomach and tends to be very gassy! He is notorious for kicking off his socks. He is always flailing when Mommy wants to take a picture of him, so they almost always turn out blurry! Eli is pictured here in his Daddy’s going home outfit.

At two months, Emry Jane weighs 9 pounds 11 ounces– over FOUR pounds since coming home from the hospital. She is very happy and laid-back, except when her reflux is bothering her. She will sleep anywhere and does so often. She is good at self-soothing. She likes to watch TV, especially if it is an animated show. She is interested in movement, lights and shadows. She dislikes having her hair washed and waiting to be fed. She has hilarious facial expressions! Emry is pictured here in one of Mommy’s dresses.