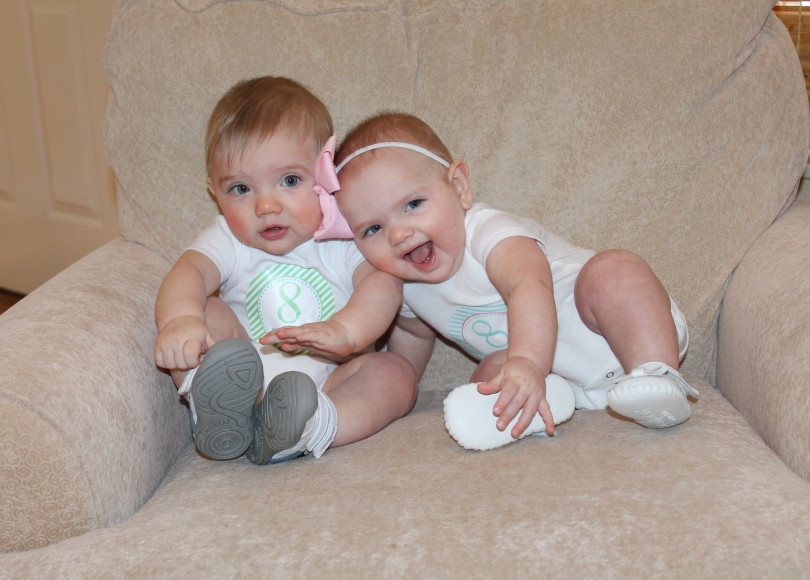 These two are now always on the move!! Getting a picture that isn’t blurry is quite a feat these days! They are so happy but SO BUSY. We are stretching out our feeding schedule even more and go from 7:30pm to 7am between feedings. This is a BIG DEAL for us. They still wake up a few times each night. Sometimes they can find their pacifier on their own and we don’t have to go upstairs; however, I usually have to make at least 2 trips during the night. I am sleeping DOWNSTAIRS and not in the nursery. Another BIG DEAL. We still have the twin bed set up in there for feeding times and rough nights. We are working on transitioning to only 2 naps: 9:30 to 11 and 1:30 to 3. We have taken away the short 30-45 minute rest around 5pm. Emry Jane is still a better napper than Eli.

The babies are doing great with solid foods. They will eat almost anything! I introduced yogurt a couple days ago, which they loved. They are also enjoying combination purees. They eat the spinach, zucchini, quinoa blend without so much as a sour face! We are currently doing 4 breastmilk feedings (7, 11, 3 and 7:30) and 3 “solid food” feedings (8:30, 1, 5:30/6) with a mix of solids and purees. I steamed pieces of butternut squash the other night and Emry loved it. Eli was not as impressed. They have both lost interested in banana chunks but like it mixed in combination purees. Emry Jane loves blueberries. Eli loves the organic store-bought yogurt melts. I have pinned a couple recipes on Pinterest so I am going to attempt to make my own yogurt melts and puffs very soon! I have a “Baby & Toddler Foods” board with lots of BLW and pureed pins, if you are interested in any of those recipes. 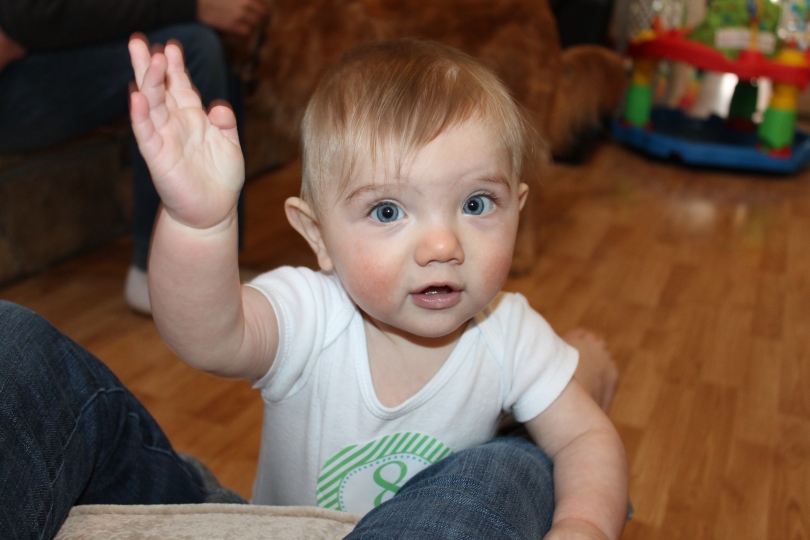 Elijah is really earning his nickname “Monkey” these days. He has learned to pull himself up and wants to do so on EVERYTHING. We have lowered his crib but he still likes to stand and chat when we put him down for naps. Eventually he will lie down and fall asleep but it takes longer now.  He pulls up then lets go so he has CRASHED several times! Luckily, those crashes have been upstairs in their nursery where there is little to hurt him if he falls. He is beginning to sit down when he lets go so he lands on his cushy cloth-diapered bottom and not hitting his head! He is very interested in the playroom and he can crawl FAST after whatever toy of Noah’s he wants in there! I have to make sure I close the nursery door when I am pumping or he will disappear into Noah’s playroom as soon as he is done eating. We are working on dividing the playroom and making it more baby-friendly but, for now, the babies have to be very heavily supervised in there– too many tiny big boy toys and choking hazards! We also always close the gate at the top of the stairs, just in case Monkey gets the idea to go down on his own! It’s a whole new ball game with mobile babies, folks!! Eli says lots of “mamamama” and others. The other day he was crawling after me and saying it– does that count as his first word? I think he knows I’m “Mama” (at least we are working on it every day) but I’m not convinced that he is saying it isolated and directed at me just yet. He says “dadadada” “babababa” and something that sounds a lot like “hi/bye” too. His favorite game is Peek-a-boo. Also, he gives lots of smiles and wide open-mouthed KISSES. He’s such a sweet and loving boy! 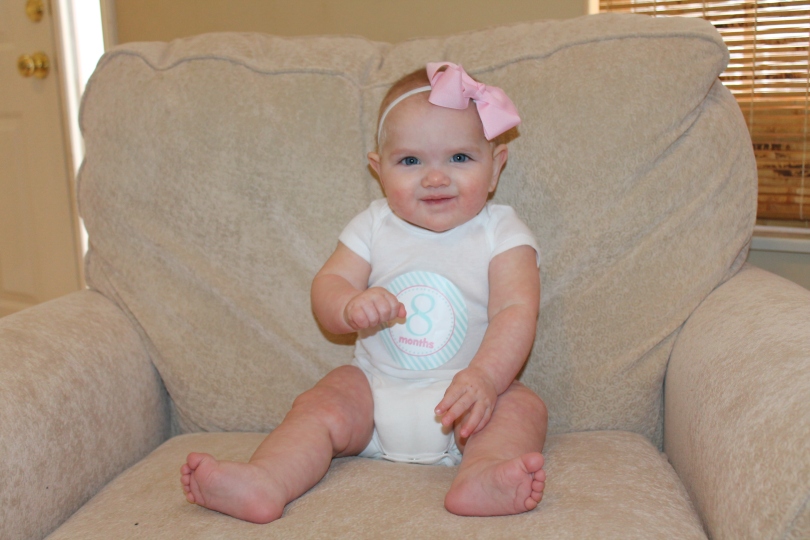 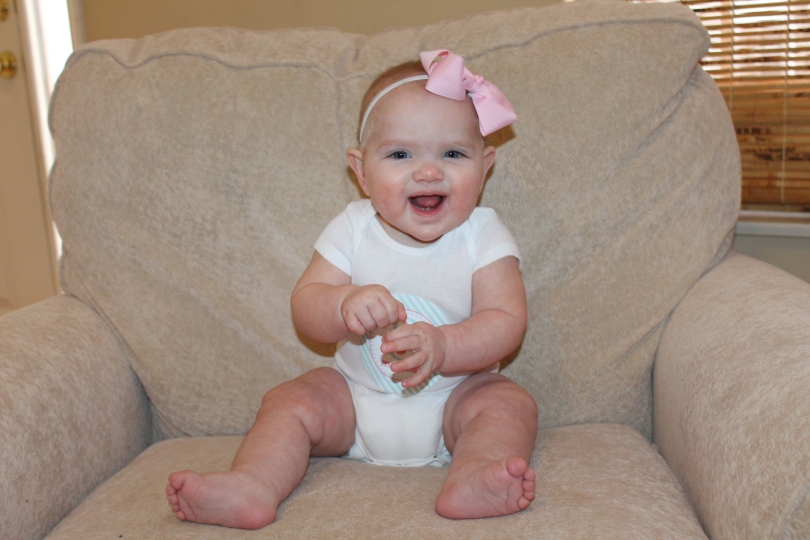 Little Miss Princess Emry Jane now has TWO teeth on the bottom (Emry: 2 Eli: 0 haha.) She communicates through shrieking. No “ma” or “da” for her just yet. She likes to rock back and forth, especially in the rocking chair or her high chair. She does not crawl on all fours but she can do a combination army crawl/forward dive/scoot to get wherever she wants to go! She pushes herself up on all fours and rocks back and forth, so I think she will be crawling that way soon. I tell Tommy that she is unmotivated to move around as much as Eli because she knows that if she sits there and whines someone will pick her up and carry her where she wants to go! She is a princess after all 😉 She is smiley and happy at home and still observant and reserved in unfamiliar places or with people she does not know. It takes her a few minutes to warm up to other family members too. She also gives sweet open-mouthed kisses. She likes trying to stand up in her bathtub and holding bath toys in her mouth (like a dog haha) and splashing with her hands! She has super tiny feet and does not fit into either of her new pairs of baby shoes. She still loves to cheer and be thrown up in the air– it’s her favorite game by far. “1, 2, down, UP” we throw her in the air and she giggles when we catch her. Think we have a future cheerleader on our hands?! We are working on her holding her arms up above her head.   She has a temper FOR SURE and hates “baby jail.” We have a big playard set up downstairs with a mat and toys. She will only play in there (without screaming) if Mommy or Daddy is in there with her.