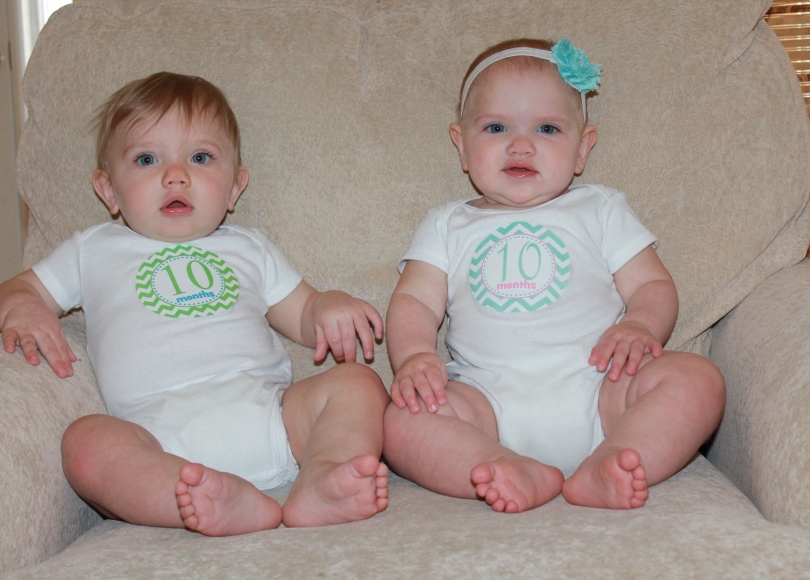 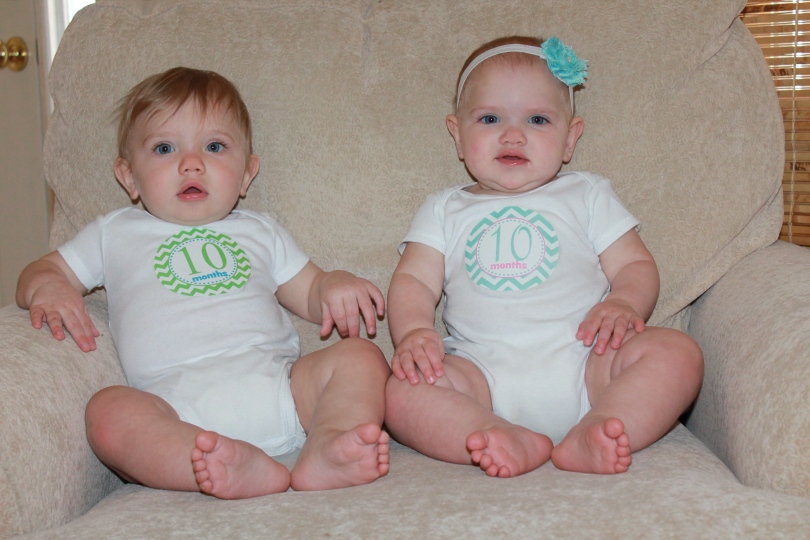 It’s hard to believe that 10 months has gone by like a blink of an eye. I know that I was behind in writing the 9 month post since we waited for updated stats from their 9 month check up. Not much has changed in the last couple weeks except that the twins are now on 3 bottles a day instead of 4. They are weaning themselves and it makes me so sad sometimes! The reality that my babies are becoming toddlers is hitting me HARD. I offer them a bottle of breastmilk (very little formula mixed in now that they are drinking less each day) at 7am, 2pm and 7:30pm. They LOVE “table food” and now have 4 meals per day– breakfast at 8:30am, lunch at 12pm, snack at 3:30pm, and dinner at 6pm. They will eat almost anything but Emry Jane is more finicky than Eli. If she does not like the taste of something, she will spit it out and feed it to our dog, Manning. He is getting quite a bit of table food from the babies these days! They have just mastered using their sippy cups. They prefer the Nuk ones but I am hoping to branch out to the Tommee Tippee and Avent ones that we already have. They started diluted apple juice after the doctor suggested it at their 9 month appointment and seem to really like it. It has helped them be more interested in their cups! They have also had water in their sippy cups while at the zoo. We went to Dollywood this past Sunday and they had cold breastmilk in their sippy cups throughout the day. I kept my small Medela cooler and an ice pack in the bottom of their stroller — No bottles and they did amazing! They enjoy bath time without their infant bath tubs but all the pulling up makes it much more challenging. Trying to keep two babies seated in the tub while also washing them in no easy task! Noah enjoys taking baths with them so we occasionally let him join and they all think that is even MORE fun! 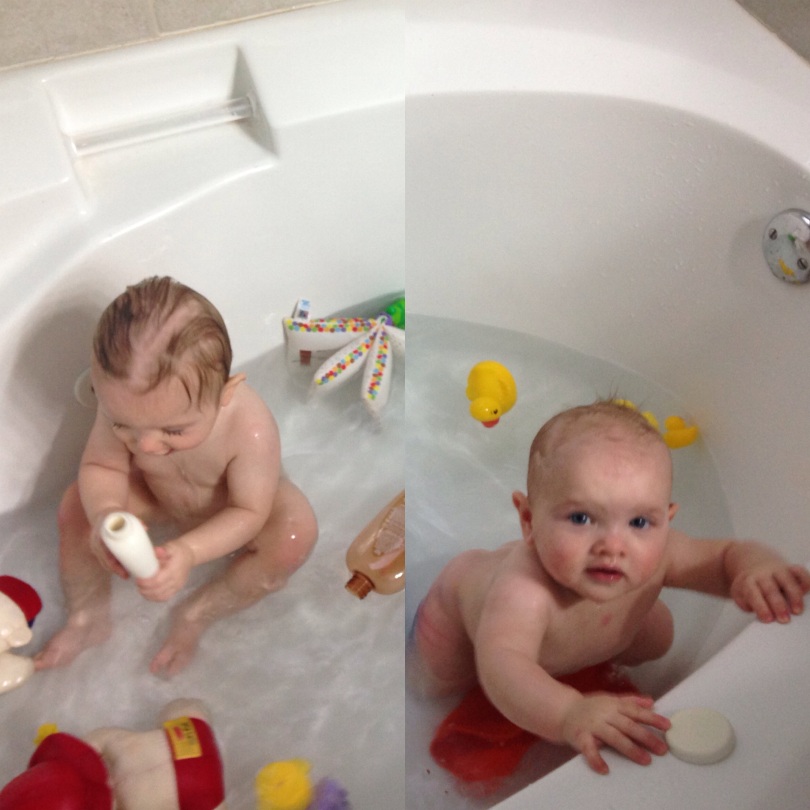 The babies are very interested in the stairs. Eli can climb them FAST. It takes Emry Jane a little more time and she stops and sits every couple of stairs. Eli gave us quite a scare last week when he managed to get past the upper baby gate and fell DOWN the stairs! We rushed him to the children’s hospital in town for a skull X-ray and he is just fine. THANKS be to God! It could have been so bad and we are so very lucky and thankful that he was not hurt. We are now even more cautious about the stairs and the baby gates. They are very heavily supervised anywhere near the stairs– lesson learned the HARD WAY! 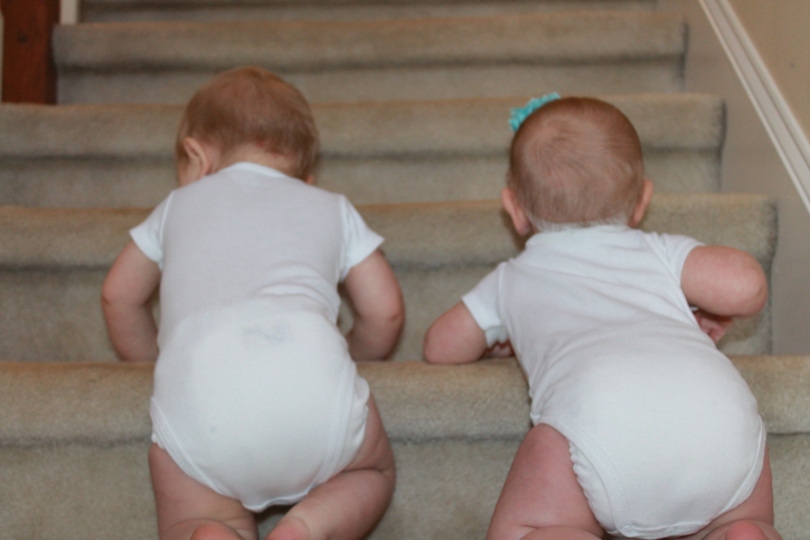 The twins got an early birthday present from Mommy and Daddy last week– a play kitchen. It is so cool. The buttons for the oven, microwave and handheld phone all make noise. The stove makes boiling and frying sounds when the pot or skillet are set on it. We bought it used and cheap from a local resale group page and the kids LOVE it, even Noah plays with it at least once a day. We plan to buy them some play food for the kitchen for their first birthday. 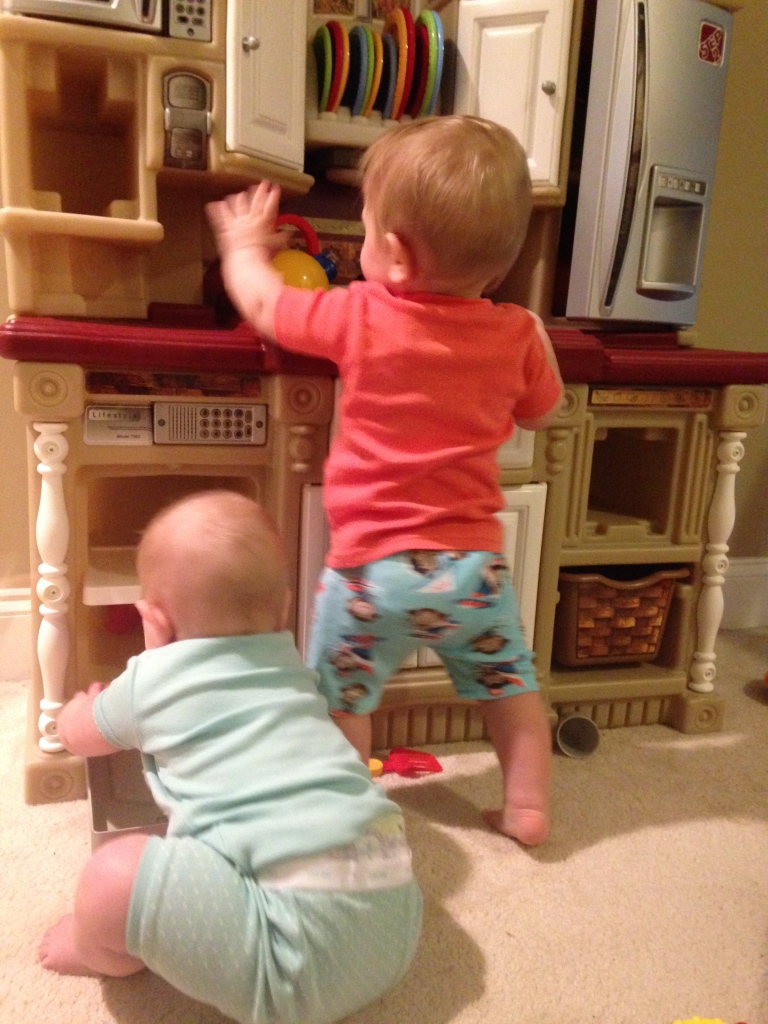 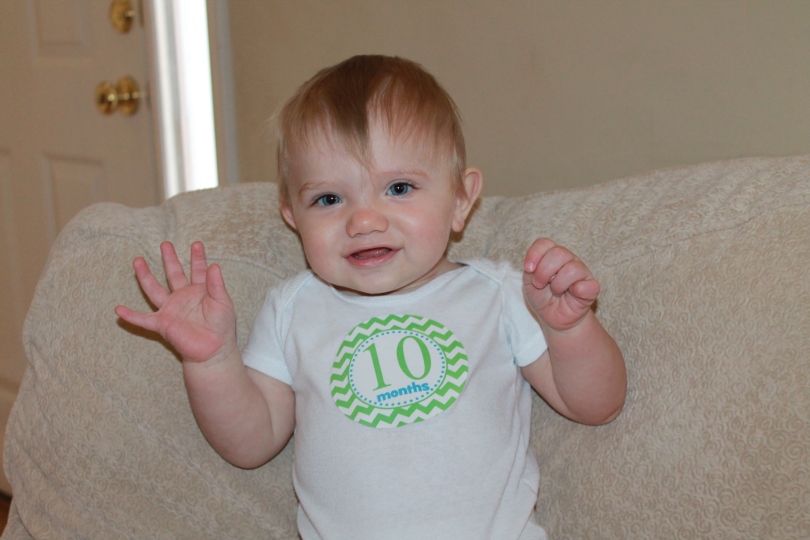 Eli is a speed demon and always on-the-go! He is fast at all things– crawling, climbing the stairs… He even RUNS when we hold his hands to practice walking. When he masters that standing and walking business, we are going to be in SO much trouble! He is very interested in plugs and cords. He is working on his second tooth right now. He cries at 4:27 almost every night. They both slept through the night for the third time EVER this week and it was amazing. I woke up in a panic when Tommy’s alarm went off. I check the video monitor on my nightstand (I love that thing!) and everyone was just fine 😉 Eli loves all food except chunks of banana. He especially likes meat and the Little Crunchies and Yogurt Melts that Gerber sells. I think his favorite food is bread, especially mini pancakes for breakfast. He’s my light sleeper but takes a great morning nap. He loves his big brother and Noah likes to push him around in his big dump truck– their newest game! 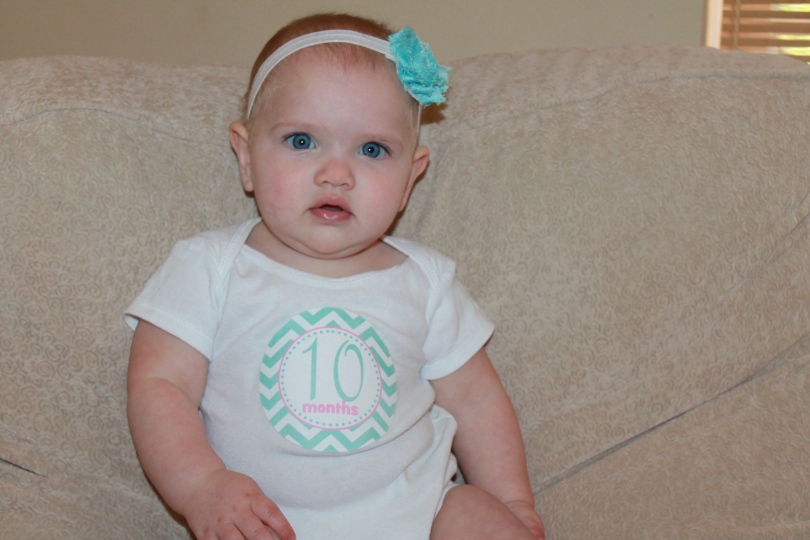 Emry Jane will make all sorts of faces for my camera, but no smiles! She is working on her fourth tooth, second one on top. She says “Mama” like crazy and “Da” or “Dada” when she feel like it 🙂 She can stand on her own for a second or two. She wants to be held all the time…and you have to be standing when you hold her or she gets upset. Princess, for sure! She naps well and sleeps great at night. 90% of the time, she will leave her bow alone, but if Eli tries to pull it off then she is done with it for a while. If she takes off a bow, she tries to feed it to Manning. She sticks her tongue out when she gives kisses so you always get licked if you want love from her. She also clicks her tongue– her newest trick. She likes most food, but currently is refusing raspberries, which she used to like. Her favorite food is blueberries.