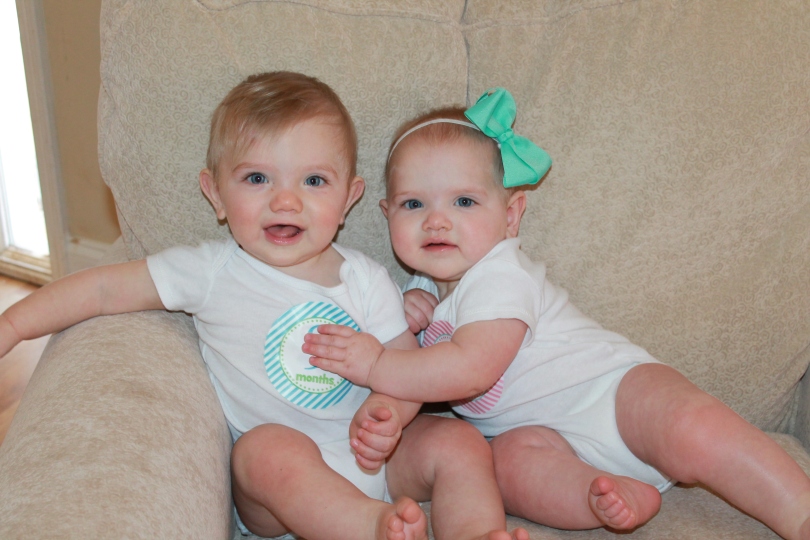 Our babies are really growing up FAST! This past month, they’ve started babbling up a storm and saying “Mama” and “Dada” 🙂 They love pulling up on everything and letting go in an attempt to stand. They can stand for about a second before they fall down on their bottom. They are crawling faster every day and usually in opposite directions– one towards the dog food and the other towards the chair with the TV/internet cords behind it! They are newly interested in our stone fireplace so the cushy ottoman now resides in front of it to block their path– time for Round 2 of baby-proofing! They hated baby jail, so we took it down. I like having more living room and kitchen space and they are so much happier with the freedom to move around downstairs! I just have to remember to put up Manning’s dog bowls before they can get to them! They’ve each tasted his yummy food before Mommy confiscated it, but have only gotten a small taste before it was whisked out of their mouths.

Speaking of eating, we went through about a week this month where the babies were not interested in their bottles but things seem to be back to normal now– thank goodness! My breastmilk supply has not kept up with the demands of feeding two babies, but my dear friend has been helping us tremendously by donating her extra breastmilk to us for FREE. Since February, I have been supplementing her milk and my own to feed my two hungry babies. We still mix 2-3 ounces of formula per bottle for each feeding, but I would have to use so much more formula if it were not for her! She has given us over 50 bags of  breastmilk. I believe that God puts people in our lives for a reason. I think part of the reason God led us to Cokesbury was to build a relationship with this Godly woman, her husband and their children through our “Life” group. They have blessed our lives in many ways and this is definitely a BIG blessing to us.

The twins have four bottle feedings per day and three meals per day. We are continuing to add new foods to their diet. The biggest one this month was chicken. I boil or bake it then serve it shredded and they LOVE it. They also really like whole milk “baby” yogurt. We alternate between Chobani greek yogurt pouches and YoBaby. The twins have pretty much done away with pureed baby food. Emry Jane will tolerate it but Eli starts to cry if he does not also have something on his tray that he can feed himself. Sweet potatoes, avocado and blueberries seem to be their favorite foods right now. They will eat anything you put in front of them…but do not even THINK about eating something and not offering it to them!

Cloth diapering is going…OK. I was getting pretty sick of all the poopy diapers… and my children are poop MACHINES, so I finally invested in a diaper sprayer that connects to the toilet. It really does make the laundry so much easier. I wish I had gotten it when we first started solids three months ago! We are still dealing with a leaking issue if they wear a cloth diaper more than 2.5-3 hours. The BumGenius all-in-ones tend to last a little longer before the leaking occurs. Emry Jane has some major “junk in the trunk” if she wears a Rumparooz diaper these days! How soon until we can start potty-training?!

We have started bath time without the infant bath tubs. The twins love the freedom of crawling around our big tub but now they like to pull up and try to turn on the water. We cannot take our eyes off of them for a second! Tommy does not like to do bath time anymore because he is terrified a baby will drown on his watch. Bath time has definitely become more challenging. I just keep repeating “we sit down in the tub” and putting them back down. I think we need to move bath time for the twins upstairs. There is a duck on the spout to prevent injury, the water knobs are higher and it is a much smaller tub. 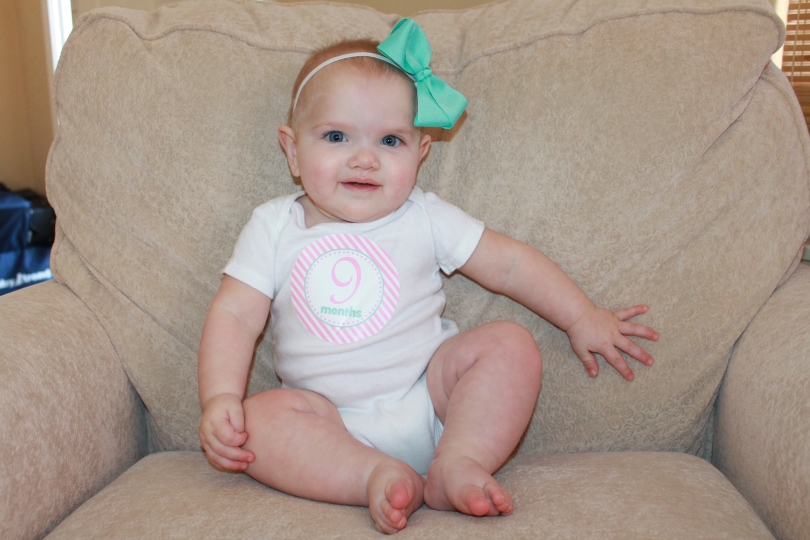 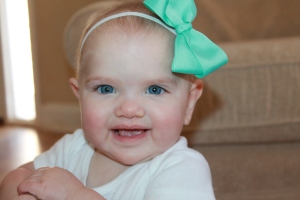 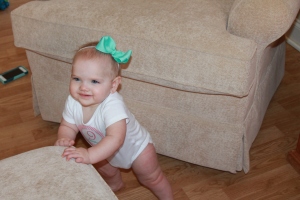 Emry Jane is our little petite princess. At the twins 9 month well visit, we learned that she is not really on the growth chart for height. She is 25.75″ tall, which puts her in the 1st percentile. Of course, her Mama and Auntie Amy are both short so I am not worried about it. The doctor thinks it’s okay too. She may just be petite. She weighs 17 pounds and 7 ounces, which is 33rd percentile, and 1.5 pounds less than big brother Eli. Her first word was “Dada.” While walking back to the car from visiting the Easter Bunny, she said “Dada” twice with Tommy holding her. She made his day times a million. Since then, she says “Mama” non-stop but he won’t let anyone forget which name she said first 🙂 She has the pincer grasp down pat and eats very daintily– one piece at a time. She is now pulling bows off her head as soon as I put them on her. Trying to distract her long enough for her to forget the bow or headband is our new game. She likes to lie back in the water in the bath tub. I think she will be our water baby! 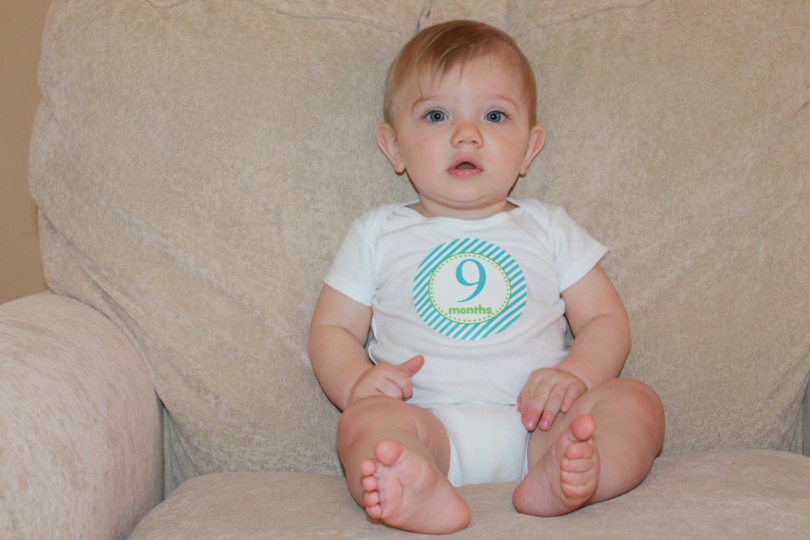 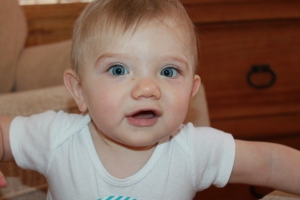 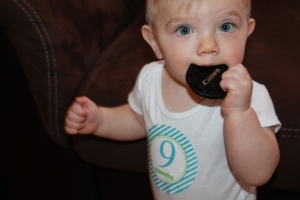 Eli is a fast, climbin’ monkey now! As of two days ago, he can climb the STAIRS. Fast! The bottom gate for the stairs does not close well thanks to a combination of effort by Manning and Noah. I do not think the gate had been closed at all when I realized Eli was on the 5th stair UP two days ago. Talk about a near heart attack! Now, we have to make sure both gates are “locked” (as much as possible) at all times! He is an extremely fast crawler. He likes to chase the dirt pile around when I am sweeping. He has perfected “mama” and babbles “dada” as well. Just not really to Tommy! He still does not have any teeth but has had rough nights the past TWO weeks, so I really hope those teeth are coming soon! He is 27.75″ tall, 16th percentile. He weights 18 pounds and 14 ounces, which is 31st percentile. He loves to eat and prefers a “whole-hand grasp and throw it all in my mouth” approach. His favorite past-time is taking Emry Jane’s pacifier. We have a few other animal Wubbanubs and he likes those too, but his favorite is Mary. Usually right out of Emry Jane’s mouth. She does not usually mind — she just settles for Montavius. 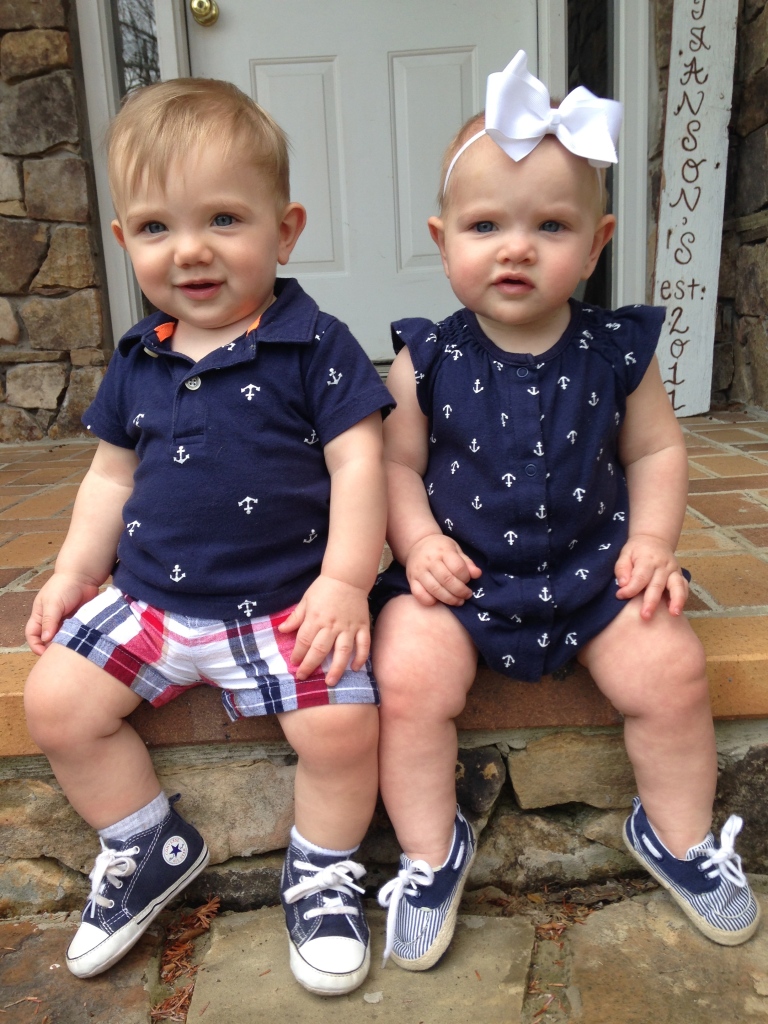