I think Halloween is a fun and completely chaotic time for parents and that our children never see how much work we put in to it to make it great. The time leading up to Halloween is chock full of fall traditions– the pumpkin patch, decorating the house, painting and/or carving pumpkins, choosing the perfect Halloween costume, etc. And all those events lead up to the ultimate Halloween past-time: Trick-or-Treating. Moving to a new state and Tommy starting a new job has changed our fall traditions quite a bit because there is so little time for full-family activities. We didn’t get to do a family pumpkin patch trip this year. Our Halloween decorations consisted of some sad, half-attached window clings on the back door windows (though I do have allll my scarecrows and ceramic pumpkins up around the house and our scarecrow family in the front yard!) Noah is the only one that carved a pumpkin this year and no pumpkins were painted at the Christianson house. We may have had to skimp on the events leading up to Halloween, but I was determined to make this an “epic” (Noah’s new favorite word) Halloween. I think I succeeded.

Noah had 6 years before any of his siblings were born that he could be whatever he wanted for Halloween… and his four parents would walk him around a neighborhood while he filled his bag with candy. He had his very own trick-or-treating entourage and loved it. When the twins were born, Eli and Emry Jane coordinated costumes (Mary & Montavius) and Noah chose to be Captain America– no big deal. Last year, I found some cheap(er) Star Wars costumes for the twins and Noah decided that he wanted ALL of his siblings to coordinate for Halloween. So, Noah was Darth Vader. Eli was Chewbacca. Emry Jane was Princess Leia. His newest baby sister Anna was Yoda. His dad Brandon was Luke Skywalker.

When it came time to decide this year’s costumes, I told Noah’s mom Jennie that I didn’t think that Noah would want to coordinate with the little ones. I thought he would think that it was too cool for him to match two 2 year olds and a 1 year old for Halloween, but I told Jennie that we could coordinate the younger 3 kids and let Noah choose his own costume. She and I chose the Wizard of Oz theme for the toddlers– Emry Jane as Dorothy, Eli as the Scarecrow and Anna as Glinda the Good Witch. We would use our dog, Manning, as the Cowardly Lion and possibly their dog, Zoe, as Toto. Noah wanted to be a Power Ranger and we said that was fine; however, once I showed him what the little ones were going to be, he completely changed his mind. He wanted to dress like them — he wanted the WHOLE FAMILY to do the Wizard of Oz theme. Jennie and I discussed it and we decided that this was probably the last year Noah would want to do this and so we were going to “go big or go home.” The dads agreed as well. Everyone was dressing up this year.

Noah picked our characters. He wanted to be the Tin Man. He wanted Jennie and I to be the two Wicked Witches and for his dad Brandon to be Oz. He mentioned his dad Tommy being “Dorothy’s Dad” (Uncle Henry) but I suggested making him the Scarecrow. We would make Eli a Flying Monkey. We call Eli “monkey” all the time so I thought that character fit Eli better than a scarecrow anyway.

I ordered a monkey costume for Eli and a Tin Man costume, silver face paint and a plastic ax for Noah on Amazon. Eli HATED his costume when I had him try it on, so I was really worried that Eli was not going to dress up at all for Halloween. We avoided most costume events leading up to trick-or-treating, just to keep the crying to a minimum. (Target had really cute Halloween Mickey and Minnie shirts, so the twins just wore those shirts any time they were supposed to go to something in costume, i.e. costume day at preschool, costumed birthday party or fall picnic.)

I wasn’t a big fan of the Dorothy costume selections on Amazon and I was worried that most would be too big for her, so I made my own using a SweetHoney dress. I bought her red shoes on Amazon and I already had the little white blouse and Little Sass Boutique white frostings for under her dress. She really liked her red, sparkly shoes. She’s even worn them a few times since Halloween. For my Wicked Witch costume, I bought white and black striped leggings and red flats on Amazon. I borrowed a solid black dress from my sister, Savannah, and bought a $5 witch hat from Party City. Tommy and Eli’s costumes required a bit more effort… 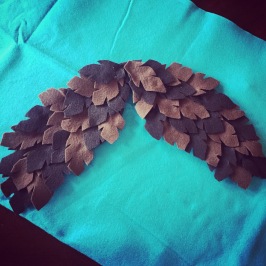 For both “homemade” costumes, I went to Michael’s and bought the craft supplies that I needed. (There is no Hobby Lobby near me and I am so sad about that.) I bought a fairy dress-up set that included a tutu, headband and fairy wings. I only needed the fairy wings for the Flying Monkey, so I gave the tutu and headband to Emry Jane. She LOVES them and wears them all the time. Eli’s winged-vest and hat are 90% felt and hot glue, 5% fairy wings and 5% blue solo cup.

Tommy’s costume was very last-minute but I think it turned out really cute. (Can you call your husband’s homemade costume cute?!) I bought raffeta for straw and an adult straw hat from Michael’s. I used some of the leftover brown felt from Eli’s costume, as well as some green felt and burlap that I already had, to make his pants’ patches. I used a pair of old J.Crew burnt orange pants that he already had as his scarecrow pants. I added squares of brown and green felt and burlap with hot glue as patches on his pants and hat. I attached raffeta to the bottom of his pants with hot glue and felt and stuffed the pants’ pocket. I also attached raffeta to his straw hat. He wore a plaid shirt and stuffed some raffeta in his shirt– voila! a scarecrow.

Chapel Hill celebrates Halloween on whatever day it falls, so our official trick-or-treating was on Monday the 31st, but we did put the kids in costume on the Saturday before for a “trick-or-treat” farm tour. We didn’t pull out all the accessories for that. As you can see, Tommy held Eli’s hat in place for the picture (below) because he refused to wear it. 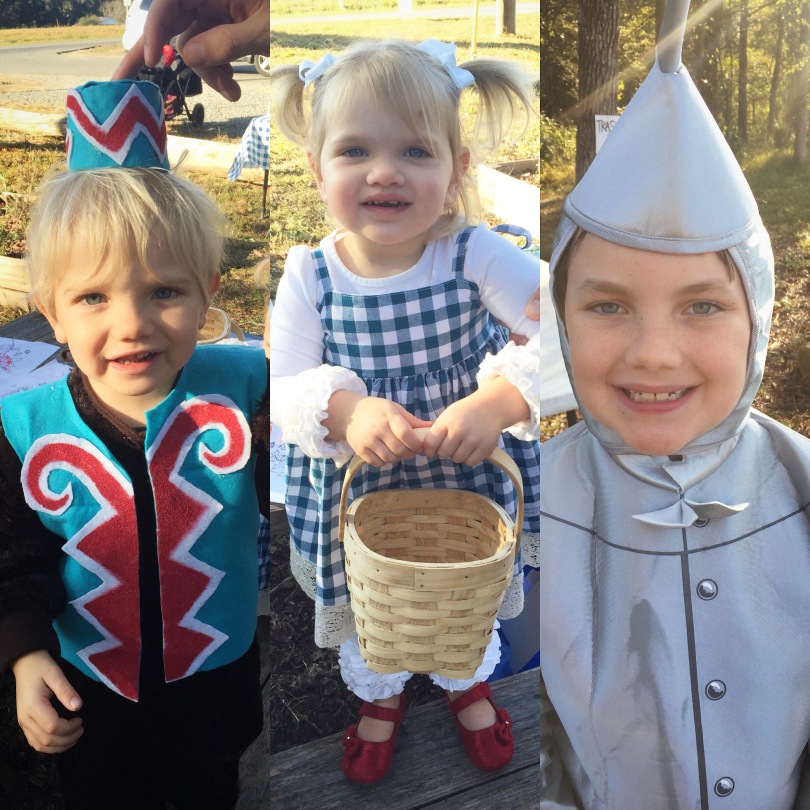 On the afternoon of Halloween, I was frantically trying to get everything set and dinner ready so I sent the kids to the screened-in porch with pumpkins, markers and carving tools (just for Noah.) Down to the wire, but Noah got to carve a pumpkin before Halloween = win. 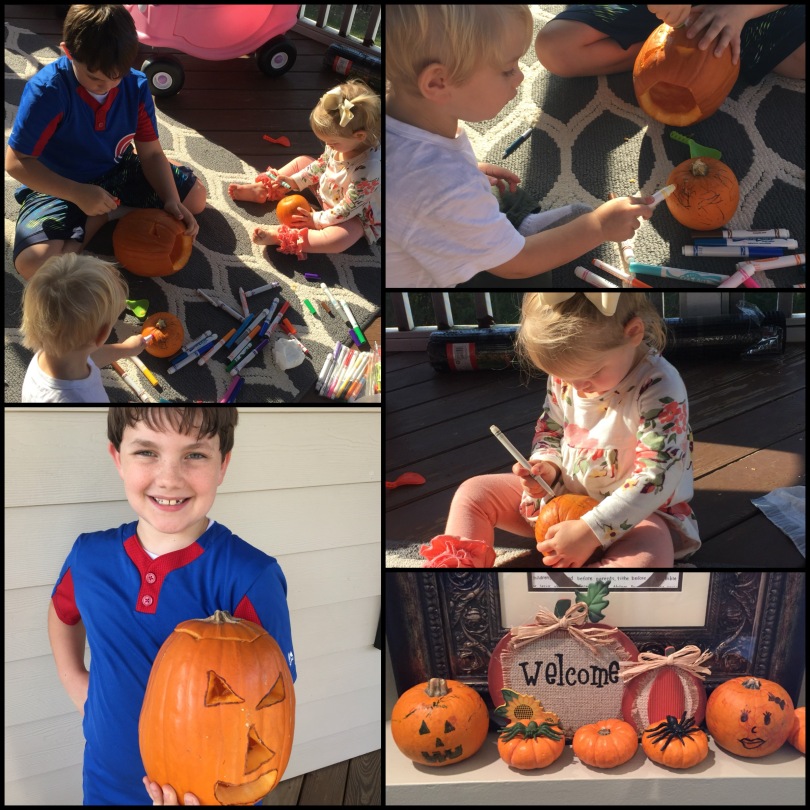 Brandon, Jennie and Anna came over for dinner before we went trick-or-treating. We all chased toddlers around the house to get them in their costumes. Jennie braided Emry Jane’s hair. We applied a couple hundred coats of silver face paint to Noah’s face. We avoided any mention of monkey ears or hat to Eli until we were completely ready to walk to the first house. We loaded up the strollers with bottles of water and extra buckets for candy (in case Emry Jane decided she wanted a bucket like her brothers, instead of her basket) and we were READY TO GO!

This is the best whole group photo we got. (This isn’t our house, but how cool is this front door?! This neighbor is very nice and was willing to take about 20 pictures of us so that we could get a decent one, haha. He also has twins, albeit they are 9 years old now.) Eli wore his flying monkey hat for all of 3 houses but he kept his monkey ears on for a whole street. Victory!! Emry Jane loved trick-or-treating and yelled “Run” and then ran to the next house. Noah ran into some friends about 30 minutes after we started and we spent the rest of the evening walking around with them. Our new neighborhood is GREAT for trick-or-treating. Almost every house was decorated for Halloween. Most neighbors waited on their front porch with large bowls of candy for the kids. The sidewalks were packed with families (which was great, but made pushing the double stroller more challenging!)

We forgot all about our Cowardly Lion, our dog Manning, until we were over halfway done with trick-or-treating. This last picture is actually from two years ago when we bought a lion mane wig for Manning. He would have made a great Cowardly Lion though, right?! It was very crowded and we were very busy chasing the twins around the neighborhood, so it would have been really hard to keep up with Manning as well.

It was a really great night. Noah says, “Next year, let’s dress up like Tarzan characters.” *insert wide-eyed emoji