Below is the story of how we transitioned to toddler beds for the twins. Right now, we are currently transitioning to sleeping without pacifiers and that has been a total nightmare so far. I’ll save that story for another day… On to the toddler beds tale…

When we lived in TN, the twins had cribs side by side. A couple months before we moved, Eli figured out how to climb out of his crib and did it a total of two times. (Both times, he was climbing into Emry Jane’s crib.) Our TN pediatrician told us that it was time to transition them to toddler beds, so that Eli wouldn’t hurt himself trying to climb out. Upon moving to NC, we decided it was the right time to put up those toddler rails since we had to reassemble the cribs anyway. The final product looked like this:

For a few weeks. Maybe 3. I don’t really remember. Moving to NC was a bit of a blur, haha. The point is that it did not last very long because the twins went nuts having access to everything in their room. Falling asleep took 1-2 hours because they spent so much time pulling all the books off the shelf or all the diapers out of the changing table drawers. The biggest issue with them taking such a long time to fall asleep is that I have to wake them up before 2:30pm, regardless of what time they fall asleep, because that is when we have to go pick up Noah from school. We live in the walk zone for his elementary school, so there is not a school bus option for him. We have to pick him up from school and the twins need more than a 30-45 min nap or they will be complete terrors for the rest of the day. They function best with a 2-2.5 hour nap. 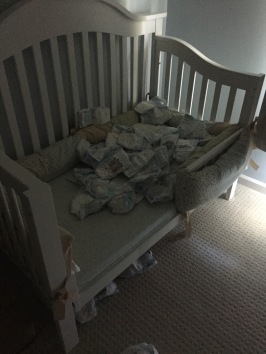 Here are some nap time adventures with their newfound freedom. In these pictures, Emry Jane has covered her own bed and Eli with diapers before falling asleep on the floor by her bedroom door.

There were rare moments when they would fall asleep in their own beds, but more often, Eli ended up sleeping in Emry Jane’s bed with her. Emry Jane did not like sharing her bed with her brother! There were a few times that she would give in and it was the cutest thing ever– seeing both of them piled in the same bed with all their blankets and toys (pictured below.) 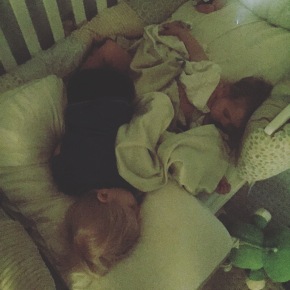 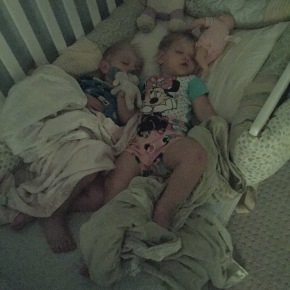 Most days, it did not work out like the cutest thing ever… Most days, EJ screamed as soon as Eli climbed into her bed. Within minutes of leaving their room, I would hear “No Eli! No ELI!!!” and then the hysterical crying would start. In her defense, Eli wasn’t the most graceful about joining her. He’d climb right over her face to get to where he wanted to sleep. That definitely wasn’t working.

Next, we tried to move his crib closer to hers, in an effort to keep him in his own bed.

Closer wasn’t close enough. I know that this picture is really dark, but most of these were taken at night or at nap time when the lights were off and shades were drawn. In the picture above, the beds are about a foot apart… and Eli’s bed is empty because he’s in bed with his sister. Again.

Then, we pushed the cribs together completely. It worked the first night but then Eli went back to climbing all over his sister in their double crib-cage and the crying began again. 😦 The next step was to push the beds back against the walls and turn them around where the twins could no longer climb out. Basically back to a crib again.

At first, I only turned Eli’s bed towards the wall, but Emry Jane decided that it was her turn to torment and she would stand outside his crib and tease him for not being able to get out. Ugh. To the walls both cribs go. Timeline-wise, this is about 3 weeks after our move to NC. Three weeks of attempting toddler beds and we were back to “cribs”…

… and nap & bed times were GLORIOUS again! We went from taking 1-2 hours to fall asleep to both babies being asleep within 5 minutes. Mommy’s sanity was restored– a couple hours of quiet time to get things done! All the choirs singing in unison until…. the first weekend in October, when the twins figured out how to climb in and out of their beds. *insert sad whomp, whomp sound* All of a sudden, climbing over the rails into their beds became a fun past time. Eli figured out how to carefully monkey his way in and back out again, but Emry Jane dove headfirst over the side like she was diving into the deep-end of a swimming pool. She was bound to break an arm, or worse, diving out of her crib. We had to turn the beds back around and allow this whole cycle to start over again. Magically, because I have no other explanation, Eli didn’t try to climb into bed with his sister anymore. The joy of dumping everything into their bedroom floor had lost its luster and they were actually staying in their beds and falling asleep quickly. *insert praise hands.

It lasted two GREAT weeks. Then, we took away the pacis and allllll hell broke loose. I told you that I would save that story for another post and I will, but just know that as of 1:40pm today, the twins have been “down” for nap for 1.5 hours and are still not asleep. In fact, I just went in there and they had at least 30 books strewn about the floor and were sitting together in Eli’s bed talking. So, I guess we’re back to Square 1. *Bangs head repeatedly on table.