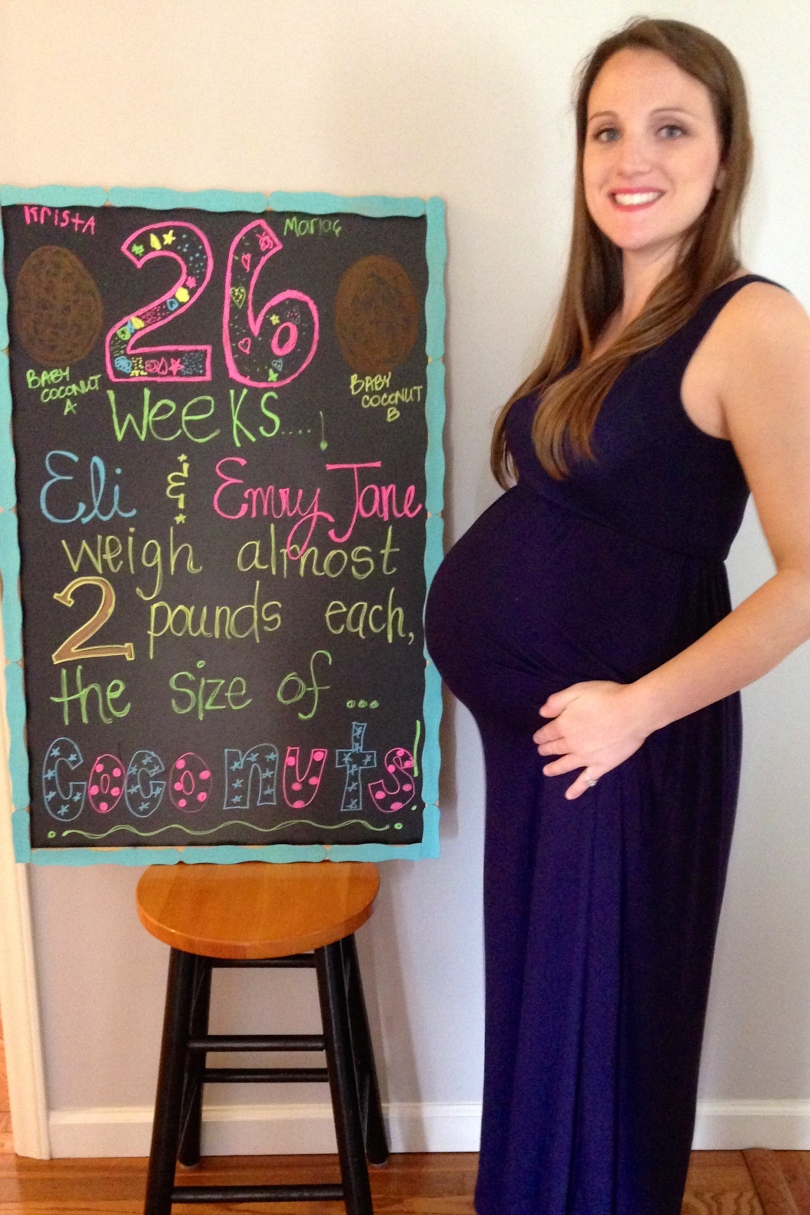 My 26th week has definitely been exciting!

On Sunday, we had a wonderful baby shower with our friends, family and members from the church we attended while living in Murfreesboro. There were at least 25 amazing women there showering our sweet babies with so many blessings and gifts.

Unfortunately, I also lost my wedding ring on Sunday. My hands were pretty swollen over the weekend and my rings were leaving red marks on my fingers. Tommy had been badgering me about doctors having to cut off my wedding ring, so I decided to take it off. I tucked my grandmother’s wedding ring safely in my purse, but wanted to wear my wedding ring for the shower so I put it on my pinky finger. I had completely forgotten about it until about 20 minutes from home late that night when I realized I was no longer wearing my ring… commence panic mode! I cried and prayed that my ring would somehow find me. I was convinced that I had thrown it away at a gas station. I called the gas station and the manager said they would look but the trash had already “made it to the dumpster” and would be taken by the garbage truck that night to the dump. The odds of finding my ring felt like one in a million and I was completely heartbroken and sick at the thought of losing it forever.

Tuesday was the best day! Tuesday morning, my ring found me! It was in my suitcase tucked into my dirty clothes from the weekend. I swear that I had my ring on after loading the car (meaning my suitcase would have already been in the car while I was still wearing my ring) but there it was– in the mesh zippered part of my suitcase! I firmly believe that God answered my prayers (and the prayers of many dear family members, friends and co-workers!) and gave me my ring back! Now, I am wearing my wedding ring on a chain until my hands are no longer swollen, which probably means until after the babies are born.

Tuesday was also my 26 week OB appointment. I got to hear both babies’ heart beats for the first time. They always get their heart rates via ultrasound, so I had never heard it with the Doppler like they used with Noah. My OB had mentioned previously that they could turn the sound on during ultrasound so that I could hear the heart beats. What a precious thing to hear- each of their little hearts beating! Eli’s HR is 139 and Emry Jane’s HR is 142– perfect! I also got ultrasound pictures of their sweet faces and everything looks great for this point in my pregnancy. Emry is once again breech, but we are not worried about that right now. She still has some time to flip and Eli is still head-down and in position to “go first.” 🙂 I go back in 2 weeks for another growth ultrasound, to check my cervix and to get a tetanus shot– fun!

Tommy also got great news on Tuesday. He scored better than he expected on his in-training exam for work AND he found out that he will be chief resident, beginning in June. Both of these things will help him when he is applying to jobs and fellowships in the coming months. I am so proud of all his hard work and accomplishments. He works so hard to be a good husband and Daddy and he is also excelling in his residency! His role as chief resident does mean an additional 4-day conference in Boston while I am 32-33 weeks pregnant, but let’s hope Eli and Emry plan to stay snug in my belly while their Daddy is away for work 🙂