If you haven’t already, click {Day 1} and {Day 2} to read about the beginning of our Disney trip! If you are on Instragam, and follow me, you can see more of our adorable Disney photos by searching the hashtag #noahsdisneybirthday. Also, welcome to the {Day} with ALL the pictures– it wasn’t monsooning like on Saturday at Magic Kingdom AND everyone was together, so I took a TON of pictures!

Sunday, Day 3, was our crew’s adorably matchy-matchy day with everyone wearing the same blue shirts with our names on them. I only heard minor complaining from the men (okay, just my husband) about wearing Mickey Mouse ears on their shirts. SewHappy did such a great job on our appliqué shirts and we got so many compliments on them! Sunday, we went back to Hollywood Studios. We were a bit slow-moving that morning (our kids slept longer than we had anticipated! Disney wears everyone out!) and we did not arrive at the park until around 10 am. Our 11 am character lunch seemed a bit silly when we got there because we had JUST eaten breakfast at the resort a couple hours before, but we couldn’t push it back to a later time. We were definitely not hungry for a huge buffet-style lunch at 11. We did have time to see the Frozen sing-along show before lunch. The twins had just seen Frozen on repeat in the car during our house showings the week before, so they were familiar with the characters and songs (though, obviously, they were not singing “Let it Go” at the top of their lungs like the rest of the crowd!) Their favorite part was the snow falling down on everyone at the end of the show!

After Frozen, we hustled over to Hollywood & Vine for our Disney Jr. Play N Dine character lunch. Again, the reinforcements decided to do their own thing since they were not on a Disney dining plan like we were. The Hollywood & Vine lunch is buffet-style and we got free plates for the twins (unlike table service meals where we had to buy their meal separately.) The kids really loved this lunch because the characters would dance around/sing with the cast members in-between visiting the tables. Each character (Jake the Neverland Pirate, Princess Sofia the First, Handy Manny and Doc McStuffins) circulated the room and came to our table for pictures. The twins’ reactions varied by character– they loved them all from afar, but up close was a different story. This meal was definitely more for the twins than Noah (who thinks he’s too big for Disney Jr. these days,) but he still agreed to take pictures with each character. We left his autograph book in the stroller parked at the Frozen sing-along with MaMarsh and Granddaddy Jer, so he didn’t get any autographs at lunch. Fail. 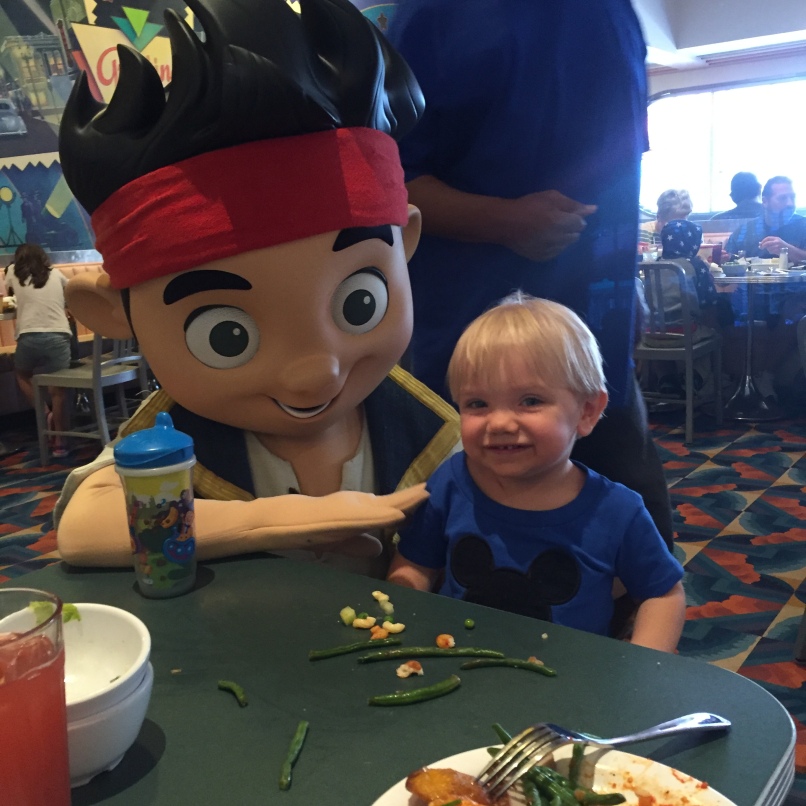 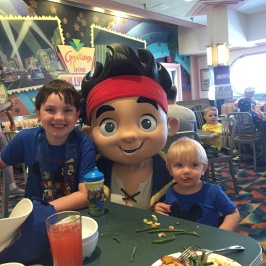 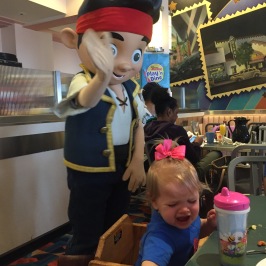 Eli’s favorite character was Jake. He didn’t want pictures with any of the others, but he was SO EXCITED to high-five and fist bump Jake. He hated Handy Manny, though I think they look very similar. Emry Jane was terrified of Jake… but look at how creepily he approached her in that middle bottom picture, haha. 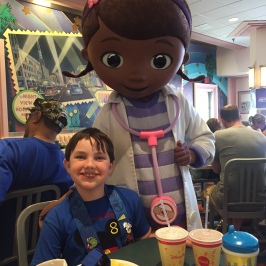 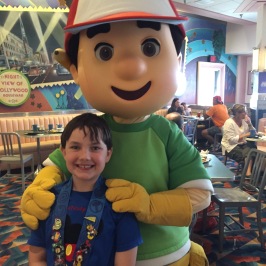 Daddy was more excited than Emry Jane about “larger-than-life” Princess Sofia. These are the other pictures of Noah with the characters that Eli and Emry Jane did not want to pose with 🙂

After lunch, Meema and PawPaw joined us. We went to Muppets 3D while waiting for our FastPass Toy Story ride. That 3D show was… interesting. 3D rides are harder with the twins because they will not wear the glasses and they also do not want you to wear them either. It’s really loud and really blurry without the glasses on, so not super enjoyable. Our next ride, Toy Story Mania, was awesome. It was Noah’s favorite ride. You compete against the other people in your car, trying to shoot the targets and score the most points. Tommy beat Noah and I, by almost doubling our points, but we still had fun!

The twins were napping by the time we finished Toy Story Mania, so we entertained ourselves by watching the Green Army Men patrol the area. After meeting them, Noah wanted an autograph, but the Green Army Man was pretending to the camouflaged behind a tiny leaf. The other men were playing along like they couldn’t see Noah either. It was fun to watch them play with Noah. 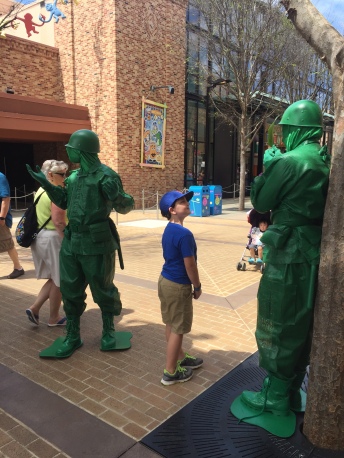 Noah really liked Hollywood Studios because that is where the Star Wars characters and shows were (and Noah has been obsessed with Star Wars for over a year now,) but it’s not as action-packed as parks like Magic Kingdom. There was a LOT of waiting at Hollywood Studios because they do the Fast Passes differently there. The system is tiered, so you pick one big, popular attraction/ride and two lesser attractions. Ours on Sunday were Toy Story Mania, Voyage of the Little Mermaid and Disney Jr. Live on Stage. We missed our Disney Jr stage show FP because lunch ran over (remember, character dining will always take longer than you expect it too, even buffet-style,) but we were told by a cast member that there isn’t usually a wait for the Disney Jr. show so it ended up working out just fine. While waiting for the Voyage of the Little Mermaid, I planted Noah in front of two patrolling Storm Troopers for a photo. They will not stop for photos or autographs “because they are patrolling,” but I took advantage of the fact that a little girl had stopped them to snap this picture: 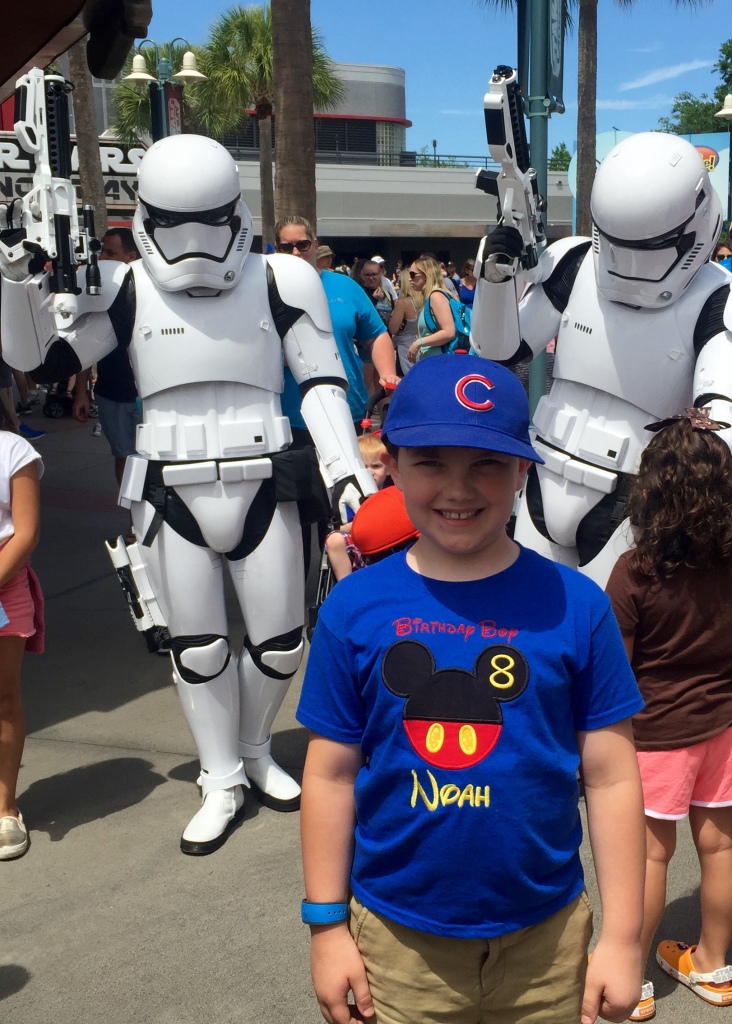 How cute is his birthday boy shirt?! So many people told him “happy birthday” when he was wearing it– I definitely think it made his day even brighter to have the extra attention!

The babies enjoyed Voyage of the Little Mermaid, except for the giant Ursula. I had two babies clinging to me during that part! They really liked Ariel. Emry Jane even remembered her on Tuesday when she saw her in the Festival of Fantasy parade! Afterwards, we waited in line to see Minnie. Had I known that we would see Minnie THREE more times during our trip, we probably wouldn’t have waited in the hot sunshine to see her on Sunday, but MAYBE the whole group picture with her makes the waiting worth it?! 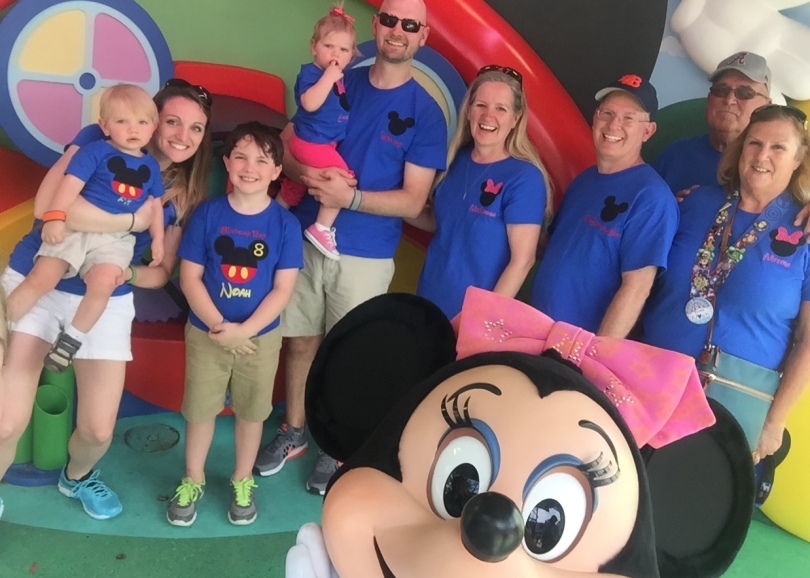 Minnie’s selfie with our group 🙂 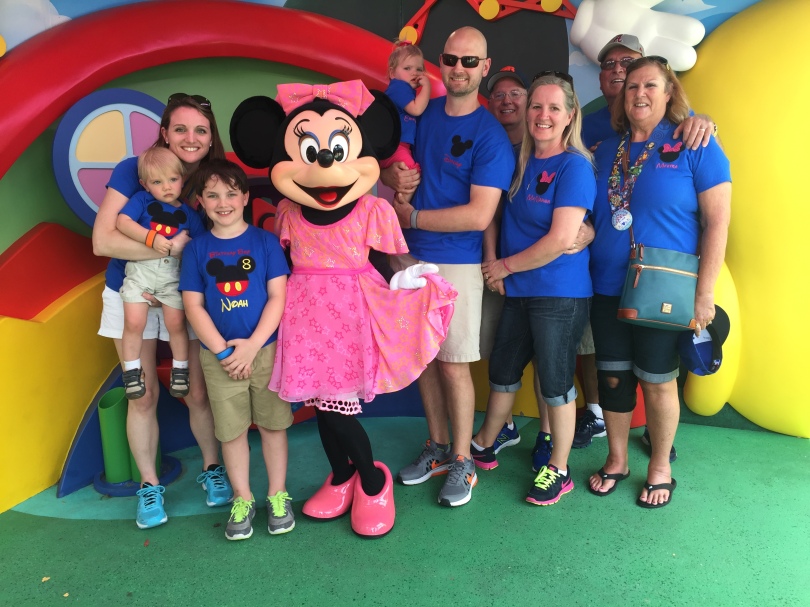 Check out those adorable matching shirts 😉

Eli was a pro at mean-mugging during our character pictures, but I promise you that he loved meeting them, especially characters that he recognized from Mickey Mouse Clubhouse! 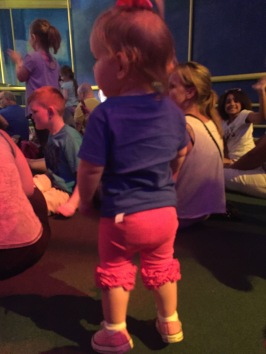 Our last stop at Hollywood Studios was the Disney Jr. Live show. The babies loved it. There were parts in the show about all the characters they had seen at lunch AND the show was about celebrating Minnie Mouse’s birthday. They were so excited about things falling from the sky– there was snow, streamers, paper gold doubloons AND bubbles. Emry Jane, our sweet little organizer/pack rat, picked up as many of those things off the floor as she could! They should have hired her as part of the clean-up crew, haha!

The big attractions at Hollywood Studios had really long waits, most over an hour, during our time at the park on Sunday. Noah never wanted to wait longer than 30 minutes for anything, so we decided to leave the park and enjoy some pool time back at Art of Animation. Here are a couple of shots of everyone as we were leaving the park:

The  biggest pool at Art of Animation is Finding Nemo-themed. There is a big pool with a beach-like entry and varying depths. Noah loved that you could hear music when you went underwater. The babies loved that there was a separate splash pad area where the water would shoot up in different places at different times. They would chase the water from one spout to the next. They did swim in the big pool too, but it was chilly (at least the adults thought so!) 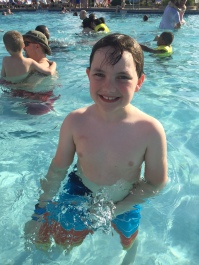 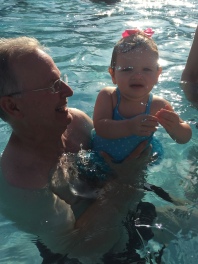 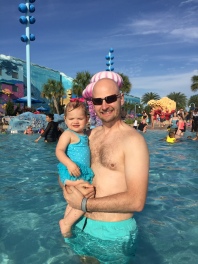 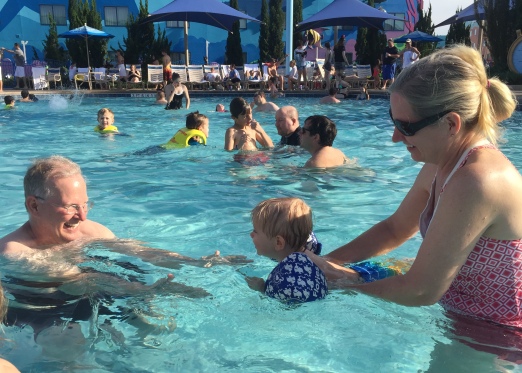 We didn’t last long in the pool, maybe an hour. We visited all the cars parked in Radiator Springs on our way back to our room. They really did a great job with the themes at Art of Animation. I think Mater was their favorite. He was parked right outside the building we stayed in. Afterwards, we watch America’s Funniest Home videos, ate pizza that we had delivered to the room and went to bed. It was the most low-key day of our trip, by far! 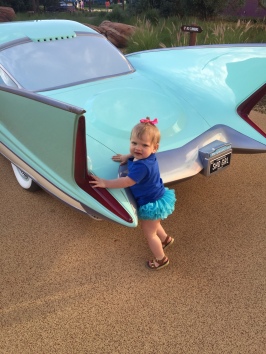