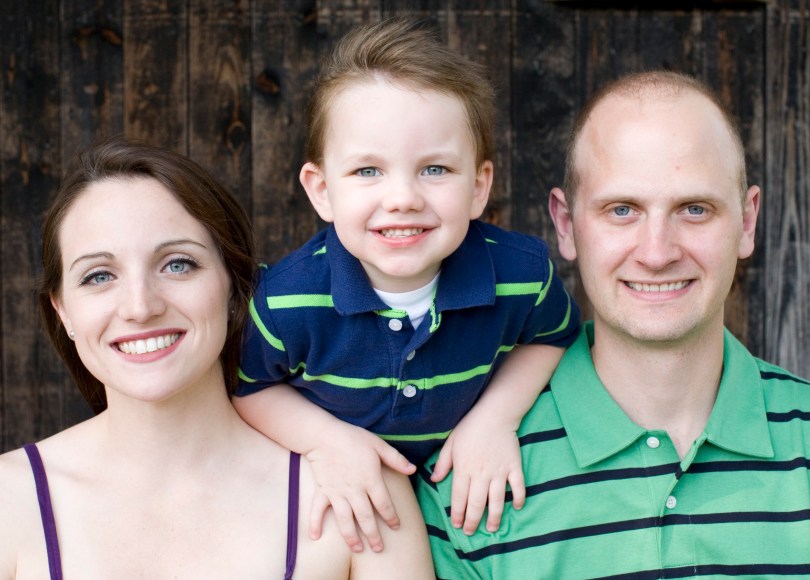 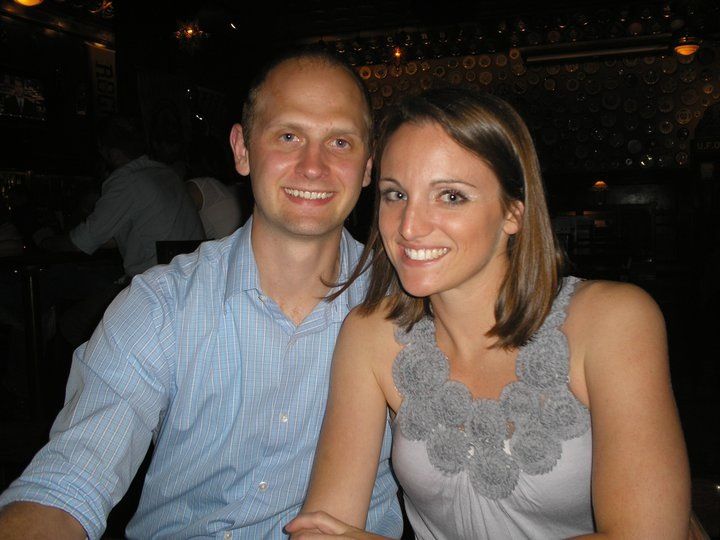 I’m going to go way back to when Tommy and I were way more tan and rested than we are now… We talked about adoption even when we were dating. It was something that I have wanted to do, for as long as I can remember. Even as a child, I saw a need for families for children that did not have loving families. I knew that I wanted to adopt some day. The timeline for that plan was altered some when Noah was born. In 2009, I was a single mom with a one year old– not how I had planned for things to be. When Tommy and I met through his sister, he knew I was a ‘package deal,” a Noah-and-me combo. Most of our dates included a toddler-sized third wheel.

During our home study process, T and I both had to write these autobiographies for our social worker based on this huge list of questions. When I was proofreading Tom’s responses before e-mailing it on to our social worker, I read a paragraph that brought me to tears. Here is what he had written: “Getting to fall in love with Noah and Holly at the same time was a unique opportunity that few people get to experience.  I feel that God definitely had a hand in our relationship.  When I first met Holly and Noah, I was a single guy in his mid 20s, who predominately ignored small children as if they didn’t exist.  In fact, I had gone on a single date with a girl with a kid a few years prior and not another one, for the sole reason of not wanting to have to deal with a kid.  Noah was the first small child that I had ever, including extending family member’s kids, really paid attention too.  He was so much fun to be around.  He had a sparkle in his eyes at all times, an infectious laugh, was a funny little man and incredibly smart for his age.  Sometimes I couldn’t tell who I was falling in love with faster.” There is not a doubt in my mind that we will love our adopted child any differently than our biological children because I have witnessed how much Tommy loves Noah over our almost eight years together. Love, not biology, made us a family.

We got married in June 2011, moved to Knoxville for Tommy’s four-year anesthesia residency and settled in to life as a family of three. New jobs, a new town, no more family nearby, a defiant three year old — The idea of having more children was off the table for a while. For our one-year anniversary, we went to Charleston for a long weekend and I remember bringing up adoption again. Tommy was not keen on the idea. We decided that when the time was right, we would start with one more biological child and then discuss adoption for the third. Tommy was set on three children total. I think he figured that after we had our second child that I would want to have another biologically and adoption would be taken off the table altogether. In my mind, I thought “Noah + biological baby + adopted baby = three” and we would both get what we wanted.

Yep, you know where this story is going. Then came the twins. In November of 2013, I found out I was pregnant with TWINS. No fertility meds and definitely not expected. We were shocked to find out we were having twins! Before they were even born, Tommy said we were done. We had our three children.

Eli & Emry Jane were born on June 25, 2011 — on our third wedding anniversary. Almost two years to the day from when we had made our plan on the way to Charleston to have ONE biological baby. God laughs at my attempts to plan our life. I’m still learning each and every day that HIS plans are infinitely better than my own.

Adjusting to life with twins and Noah was challenging. The first year was just survival mode. Between reflux for Emry Jane, weight gain issues for Eli, sleep deprivation for all of us, baseball three days a week for Noah, and chief residency for Tommy, Mama and Daddy were zombies well into 2015. In the fall of 2015, Eli was FINALLY starting to sleep through the night. The medical issues for the twins had resolved. We had a good routine going… and I started bringing up adoption to Tommy again. We started watching adoption documentaries. I followed adoptive moms, consultants and agencies on social media. Tommy said “no.” “We had agreed on three kids.” “Life was insanely busy as a family of five.” I just didn’t FEEL done. I felt that God had put adoption on my heart all those years ago for a reason. At this point, I started praying that God would either soften Tommy’s heart to adoption or harden mine. I asked Him to help me feel like our family was complete or to make it known to me that I was supposed to be involved in the adoption community in a different way. We were (okay, I was) already giving to adoption fundraisers to bring other people’s babies home, both through domestic and international adoption, and I was ready to be working on fundraisers to bring our own baby HOME!

We talked about adoption every few months for almost two years. Every conversation went similarly. I stated all the reasons why we should do this, add to our family through adoption. T stated all the reason why he didn’t think that we should do this. He was afraid that he would not be able to give enough of himself to four children—not in the way that he wanted to. He works a lot right now and he feels like he cannot give enough time to everyone. He was also worried about the logistics—how would we get everyone to baseball and dance and soccer and whatever other extra-curriculars they wanted to do if we had 4 children?! I just told him that I was watching so many big families on social media doing it every day — living their lives fully, playing sports, going to school. Not that things weren’t hard sometimes, but it was worth it to them. They weren’t ruining their kids because they didn’t spend as much individual time as before—they were teaching their children about God and his love for all of us, they were loving their children individually through date nights with just one kid and Mommy or Daddy. I have four younger siblings, which means that I came from a pretty big family and I don’t feel ruined. Life was busy, but I was loved.

We agreed that we do not want to grow a 4th child in my belly. If we were going to grow our family again, it would be through adoption. I knew that Tommy wasn’t ready, so I just continued to pray. Almost every time we would discuss adoption, I would say “God already knows. He already knows if we are going to adopt and who we are going to adopt and when. It’s already written.” We just had to keep praying and waiting patiently (me) and giving the situation over to God. Over and over again.

February 26th, a day that changed our lives, was a Sunday. Our church here in NC was doing a “Reach Out Celebration” about how the church was going to do outreach for 2017. We had invited friends to church with us for the first time and I was NERVOUS. I was worried that the sermon would be a plea for money and that our friends would feel uncomfortable there. While we were waiting for them to put their children in the nursery, the creative director for Grace Church, Chris, came up and introduced himself to us. He and Tommy had actually already met back in the fall because he came up to T, who was holding our twins, and told Tommy that he ALSO had twins– a biological daughter and an adoptive son born just days apart. I had also met his wife at a church meeting a couple months prior. I told Chris about how I had met his wife and remembered their family because they had adopted, which was something I had already wanted to do. Chris suggested that we watch their adoption video that was on the church website. He turned right to Tommy and said, “Be careful, it might change your heart toward adoption.” Our friends walked up right after that and we went on to the church service.

Though the sermon was not specifically about adoption, we heard God’s call loud and clear. “We are so blessed. Use that blessing and give to one. Make a difference to one. The goal is one less.” It brought me to tears—yes, we have been abundantly blessed. Yes, we want to use that blessing to give to others through our church, but we also want to use those blessings to give to ONE through our home. On the way home, I asked Tommy, “Did the sermon make you think about adoption?” He said, “Yes.” And started asking about budgets and how we could afford adoption! During nap time, he pulled up the video that Chris had been talking about earlier, about how they adopted their son Ezra from China. The video made me cry (that’s going to be a common theme in this story!) and it also generated a lot of discussion between us. “How much did adoption cost? What was the timeline? International vs domestic? Toddler vs. infant?” Mommy and Daddy talked for hours that day and Tom never mentioned not having enough time or love to go around. He even suggested that I email Chris about possibly going to visit the orphanage in China with the church!

The next morning, I got an email from the mission trip coordinator that the orphanage trip to China had already taken place for the year and that he would keep us in mind for a possible trip the following year. I was a little disappointed not to be able to go visit, but I was so amazed that Tommy was even open to seriously discussing adoption! While I was sifting through social media that Monday morning, I saw a post from FAC, an adoption consultant group that I follow on Instagram. It was a sleeping baby girl in a basket with the words “God puts dreams in your heart that are bigger than you so that you will rely on Him and His power.” How true is that for us and our adoption story?! These dreams are SO MUCH bigger than me! I knew that God was telling me to keep relying on Him– He was writing this story! I also knew that the night before had been the biggest time I had ever heard God talking to us about adoption (and I didn’t even know the full story yet!) The conversation between Tommy and I had shifted from “How can we parent four kids?” to “How can we pay to adopt and from where?” – what a huge shift orchestrated by God. I immediately wanted to research and plan and prepare, but those priorities had to shift the next day with a phone call from Noah’s school… 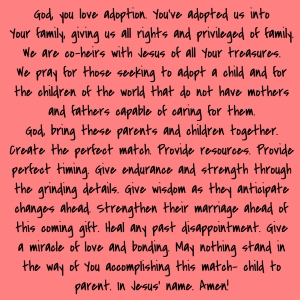